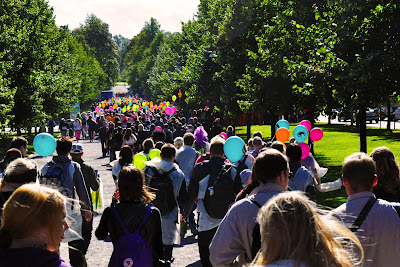 Story and Photos by: Joanne N H Wong
It was a bright sunny day on the 5th of September, 2012. The streets of Tampere were crowded by amusing costumes put on by new TAMK students of 2012 attending the Tursajaiset. It is a tradition to welcome the first year students, with marching from the town centre of Tampere (Keskustori) towards a secret location which the students enjoyed a series of games filled with fun and laughters to celebrate a great day of becoming part of TAMK.


Among the crowds, we see a group of young people with their moustaches and good looking outfits resembling the 70s cop in style. The 12IMP batch has decided to celebrate Tursajaiset with the spirits of bringing justice to the world with (toy) guns and retro sunglasses. The 12IMP group was glad to have tutors joining them in the march and giving them hints and tips about the upcoming game challenges besides sharing their past year experience of the event. 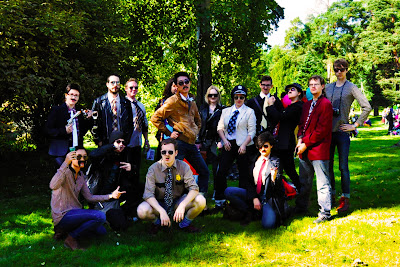 As the group arrived at the secret location, maps were given to them as they split up into two teams heading to their ways to take up the game challenges lying ahead. Teppo, who volunteered in the first game, has made his best effort to search for items hid in a pool of macaronies pasta with his eyes blindfolded. 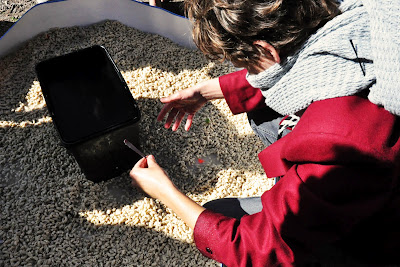 After some points has been scored, the 12IMP teams proceed to another game, which required teamwork and some good running. The team got exhausted from running too fast but so much laughters was in the air during the game.

With dance music filling the air, some of the 12IMPs were having good times moving their bodies as they enjoy the sun illuminating the greens and lake where the group were sitting around each other chatting and watching other groups playing 'swap-your-outfit' games. The group managed to interact with other batches of students who dressed up as 'hobo', as well as amused by creative students who crossed-dress themselves as sexy ladies with hairy legs and balloons in their chests.

As the sun slowly sets to a lower angle in the sky, the group of '70's cops' slowly walked back to the campus to call it a day after spending good times in Tursajaiset. It was definitely an interesting day for the 12IMPs, as they look forward to more events to come and sharing the moments with the amiable group members and tutors of 12IMPs.