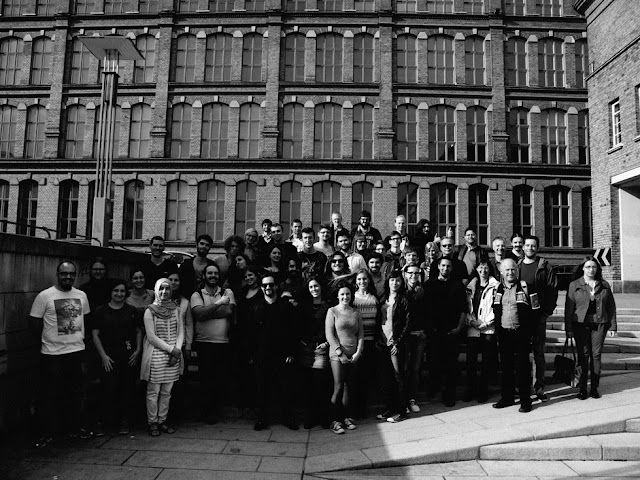 Last Friday, the Serious Game Design Summer School came to an end. These two weeks of intensive learning and group work spanned over twenty lectures held on the spot, with around nine or so Skype call-ins coming from industry professionals all over the world. Here is a brief summary of what actually took place in SGDSS '13.
Read more »
Posted by juippe game design, International Cooperation, SGDSS, summer school

Jani Ilomäki, student of our Degree Programme in Film and Television, is the winner of the Blue Sea Film Festival Golden Baltic Herring Award last weekend.

His film "Awakening" also won the first prize in the student film competition of the festival. The jury statement was: “The story-telling was poetic, entertaining and concise. The story poetically illustrated one of the more profound and personal moments in the development of a child.”

The synopsis of the film is: "A boy sees a girl. A girl sees a boy"

In addition his also his films Juurtuneet (In a Rut) and Ajatuksia kuolevaisuudesta (Thoughts about dying) were invited to the festival.

Also next weekend will be very busy for Jani, he's one of the key organisators of the Reikäreuna Film Festival, 5-8 September 2013, Orivesi 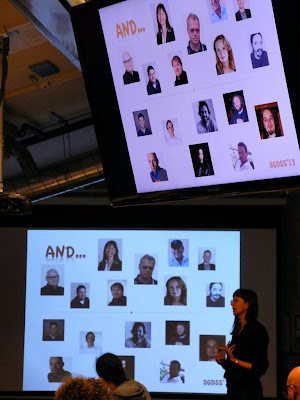 The Serious Game Design Summer School, or the "SGDSS" as it is shortened, kicked off today at the Ada classroom, fifth floor in the TAMK Finlayson campus. The summer school is led by Paul and Maja Pivec and the aim is to have very intensive two weeks focusing on different aspects of game design and game development.

One, two and one, two, tree, four... ONNELLINEN PERHE! (A Happy Family)


The new first-year students of Tamk Art and Media have started their studies this week.

Traditionally, the teachers of Fine Arts and Film and Television studies perform a song at the beginning of the new fall semester. This year's song was "Onnellinen Perhe" (A Happy Family) by the band Ne Luumäet. The teachers were equipped with rhubarbs and enforced with a ukulele and a drum.

After the opening, the tutor students took the newcomers under their wings and started to lead them to the wondeful and confusing world of the Finlayson campus. A lot of things have to be absorbed, but luckily, the tutors will be there to help the new students now and along the coming year.

The Degree Programme of Media students arrived a bit earlier, and had their introduction session in the Ada classroom of the fifth floor.

During the summer, 18 people (4 teams) from three different programs of TAMK have been working on five games during five weeks, five days a week and five hours a day. You can see the finished games at http://score.igda.fi/5d . The summer project was organized by game development club Score. 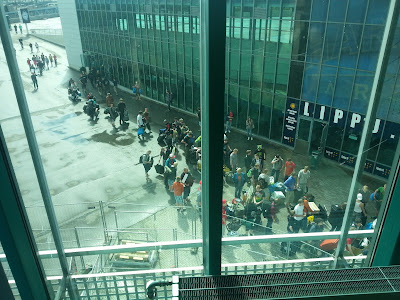 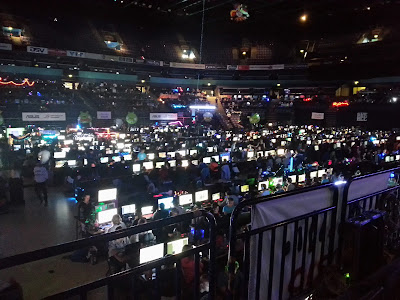 The 5D team has landed home from the adventurous occasion of Summer Assembly 2013. During the four days on 1 through 4 August, our quest was full of wonders of the party place itself, but we also brought our own creations to the table for others to enjoy. At our TAMK presentation stand, desks were full of computers and devices running our games, and people steadily gathered around to take a curious look at what was being showcased. Some stayed for longer chats and exchanged contact information with prospective game developers from our team. 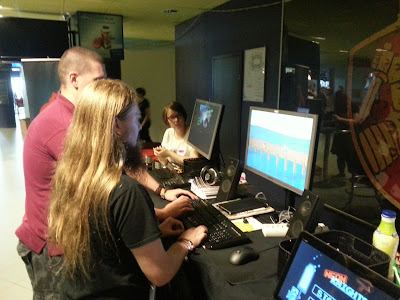 Immediately on the first night, the gamer crowd was treated to a live concert from The Super Sound of Video Games. Consisting of the mixed choir of the Turku Opera choir, various brass instruments, piano and drums, the group delivered an interesting show, albeit varying in quality and overall ability to capture listeners, of tunes ranging from the 80's to modern-day games. Bubble Bobble, The Giana Sisters, WarCraft 2, Morrowind, Baldur's Gate 2 and many other memorable soundtracks were given tribute. 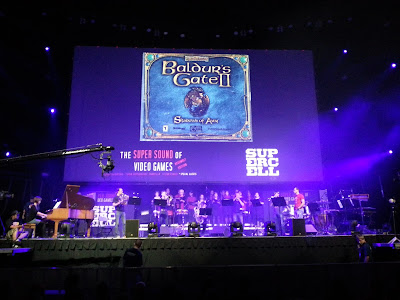 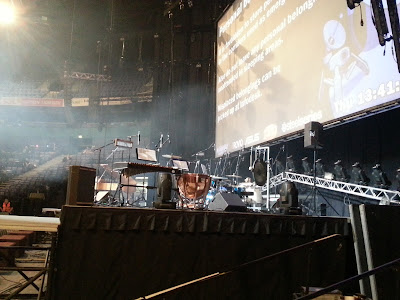 The main attraction were naturally the demo competitions and short films. Many agree that the 4K entries stole the show this year with their cunning ideas, but the Real Wild demos were not left far behind, if at all. One does not simply forget a demo made using an ancient electronic train schedule board (complete with music made using snippets of the original train station announcer voice clips), or a graphic calculator screen for that matter. The slight disappointment that the Oldskool demos were dominated by a single entry, was quickly forgotten, thanks to the many amazements from other categories. 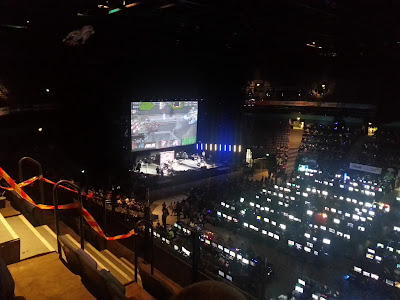 Also shown on the biggest screen in Finland was the live-commentated grand finale of ASUS Republic of Gamers StarCraft 2 tournament. The match was between two young Asian master players, Taeja and San. After recovering from a dreadful start, San managed to win one game and start strong into another, gaining the applause, support and enthusiasm of the crowd. Eventually Taeja defeated San however, but it was very exciting to watch nevertheless. Taeja's prize was a boggling 10 000 dollars!

Elsewhere, fighting game tournaments were held with Tekken Tag Tournament 2 and Street Fighter IV. Two of our team members entered the SF4 competition. Opposition was strong and ultimate victory came only to those deserving, but nothing seemed to bother the calm yoga cool of this Dhalsim cosplayer. It seems drinking energy drinks was one of his new special moves.

ARTtech presented the crowd with several seminars covering topics from gaming industry business to actual tips for programming. On the same spot, another smaller game music concert was held. Always nice to see and a good effort. But next year, Assembly: let's get some really good singers for the job, okay? 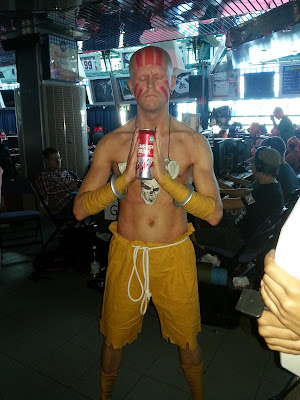 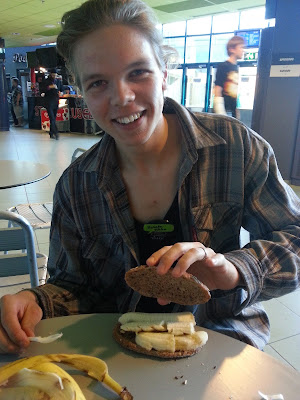 2800 computer places all sold out – that says something about the magnitude of this event, and I believe we can all agree that it was amazing! The whole trip was so crazy that in order to avoid burgers and 8-euro pizza slices most of the time, we invented some devious, nutritious new foods like banana-rye bread. The little sleeping that we did was tough for some of us at first (my air mattress was taken from me at the door), but soon the constant chiptune raving and concrete floor couldn't stop us from falling asleep and regaining power for the next day. Many of us were here for the first time, and for myself I can say I will surely come again next year. A big thanks to organizers both at Assembly and TAMK!

Written by Matias Lehtoranta
Sound designer in 5D, student of music technology at the Pyynikki campus


We were also invited to a sponsor sauna by the organizers of Assembly but strangely, we do not have photos from there! 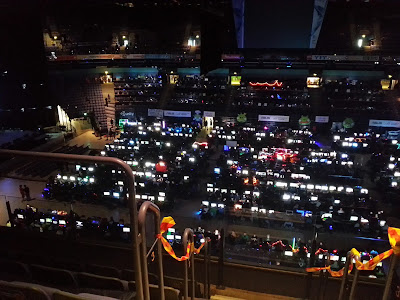