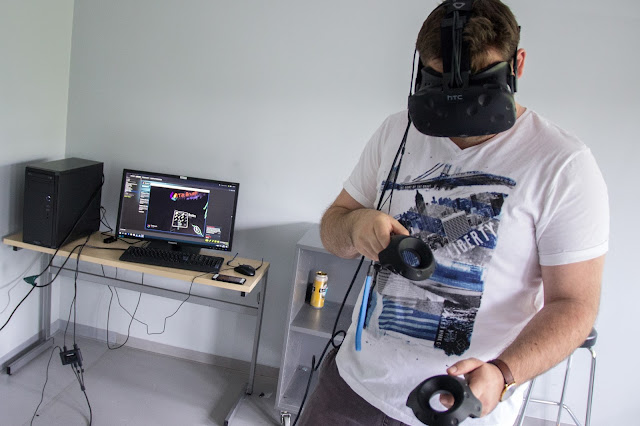 TAMK collaborated with four different companies to bring a special opportunity for the students to work with VR using the sprint method. The idea was to see whether this kind of setting could be used in an university environment and provide students with unique experience with working in a multitalented team and with virtual reality. I was one of the students participating in the sprint week and here is my story of how the week unfolded. 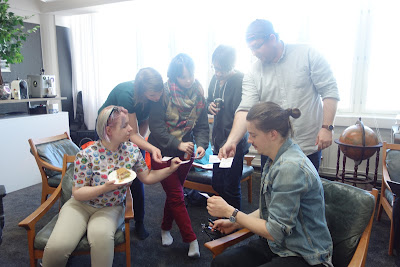 Before the actual sprint week we had a common session to meet up with our fellow students to establish an understanding of what was going to happened during the actual sprint. We also played a game to divide us into teams. Each of us was given 20 points to administrate to different skills based on our personal abilities and experiences. Then we tried to match people with opposite skills within teams. This way we were able to create fairly equal teams so that in each team there would be people with different skill sets that were required for the tasks. We left the get together a couple of hours later having a good grasp of what was expected from us and eagerly waiting for the sprint to take place.

The first day was kicked off with a common meeting in the second floor lobby where we went through the agenda for the whole week before going our separate ways in our groups to meet our customers. In the group in most cases, there were some coders, graphic artists and audio designers as well as UX experts and project managers. The teams consisted of four members and the tutor teacher. The customers were Intopalo, Kalmar, Leadin, and Leonidas who all wanted different kind of virtual reality content. The customers introduced themselves to us and explained the tasks that they were handing out.

Briefly explaining what kind of challenges the teams received. Leadin wanted a crime scene investigating VR experience that could be used for teaching purposes. Kalmar asked for a crane operating VR set up and requested the use of LEAP technology that recognizes the hands of the user and brings the real world to virtual reality . As for Leonidas the group’s task was to test the new FOVE equipment and create a game to see how the eye tracking feature works. Intopalo requested user experience research on attracting the VR user’s attention while utilizing the whole 360-degree environment. Each team was supposed to produce a working prototype that was to be tested on the last day of the sprint. 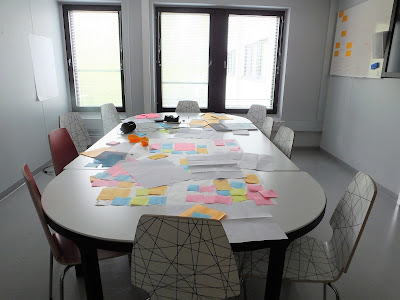 After hearing out the customer, we started to brainstorm possible solutions to the given challenge. We used post-it notes to collect 10 ideas from everyone individually and then started to gather them in one large mind map. Everyone was supposed to narrow down their ideas and choose a focus point. By the end of the day, the teams sent emails to the customers explaining what they had done for the rest of the day and what was going to be their focus. We also got homework to do as we were tasked with benchmarking in order to find out if our solution to the problem had already been tested.

Next day we continued to iterate the ideas and finally had an online meeting with the customer in order to receive feedback and get the okay to start working on the prototype. Before the meeting, we went through the benchmarking and based on our findings continued to sketch the prototype. After having lunch we proceeded to do storyboards to illustrate our solutions which we later presented to other teams to receive feedback on them.

When we had found our focus point and agreed on it with the customer, it was time to start prototyping. Each team got their own spaces equipped with the necessary programs and virtual reality headsets to test the prototype while working on it in order to find and eliminate the problems that arose as quickly and efficiently as possible. The prototyping lasted for two days and some groups stayed overtime to work on them. The teams divided the tasks for the prototypes according to the skills of the individuals; some did the graphics while other worked on the code. There was also audio design and user experience design required for most of the projects.

After each day we gathered once more to go through what we had accomplished and to ask for feedback. Luckily, we had a large quantity of different experts at our disposal when we ran into some problems. As our teachers at TAMK and some of our customers worked side by side with us we got useful tips and information from them as they guided us when necessary. 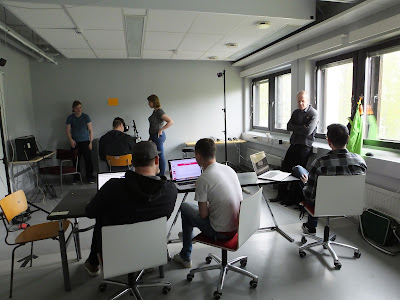 In the end, each team was able to produce a working prototype. During Friday morning, we tested our prototypes with the user tester and gathered feedback from them. Later in the afternoon, it was time to present our findings to the customers and the other teams. The sprint ended with a celebratory toast to a successful week. Even though we established that week was rough, everyone agreed that it was a success and that it was an interesting experience. I enjoyed it very much and hope to see a similar opportunity for the students in the future.