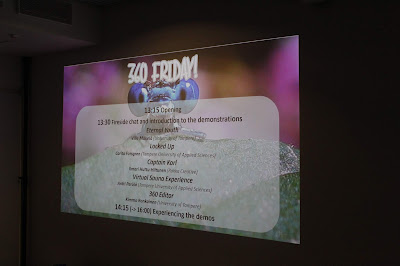 Attendees were welcome to enjoy some beers and snacks as the host, Juhani Linna from the University of Tampere introduced and interviewed some of the creators. Markku Turunen, professor of Interactive Technology at the university also shortly introduced TAUCHI (Tampere Unit for Computer-Human Interaction), a ‘research center focusing on human-technology interaction’ at the Faculty of Communication Sciences. After a few talks and presentations about work processes, the guests scattered to delve into the various demos. 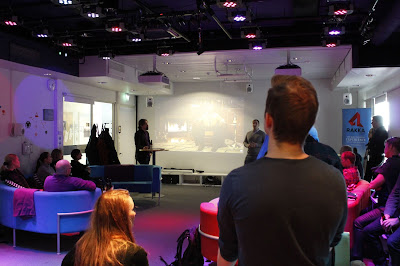 The following productions from staff and students at Media and Arts were displayed at the event:

Virtual Art Gallery - Liya Pirkuliyeva, Ignasi Granell Vendrell and Tatu Heinämäki
Attendants were able to view the VR art gallery presenting works from the degree show ‘HOT FUTURES’ held this spring exhibiting the works of the graduating class of 2014. The viewer was able to pick the artist whose works they wanted to see by picking up a tape with their name and inserting it into a player. They could also throw black paint onto the paintings and watch video works.

Locked Up - Carita Forsgren
Those who dared got to watch the 4-minute 360 thriller, co-produced by TAMK and YLE, at the first public viewing of the short film.

Fintan Sauna Experience - Antti Perälä
A VR collaboration between TAMK and the Finnish Embassy in Tokyo aiming to bring Japan an authentic sauna experience, incorporating Fintan, the embassy’s mascot. Guests were able to shower and enjoy the virtual sauna by putting on the VR gear.

The event also featured projects from other associations such as the premiere of ‘Eternal Youth’, a 360 experience with a peaceful finnish winter environment, created by the University of Tampere and Helsingin Sanomat. The purpose of the collaboration was to explore the concept of meditation in a VR environment. ‘Captain Karl’, a short VR documentary by Rakka Creative and an  interactive omni-directional video (iODV/360) editor presented by Kimmo Ronkainen from the university were also featured.

All in all the small event succeeded in displaying a compelling range of examples of how 360 technology can be put to use for different creative purposes, giving an insight to the future of more interactive and immersive media. 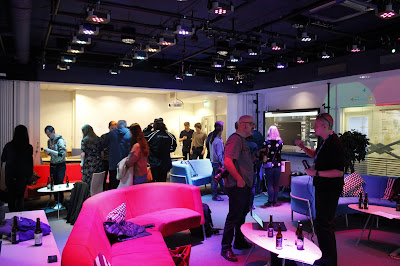 Ecological thinking and sustainability are valuable issues as part of D.P. in Media and Arts- studies, alongside e.g. emerging media, art, music and developing entrepreneurship skills. Lecturer Fanni Niemi-Junkola of fine art study path did a study trip to Iceland University of Arts in Reykjavik (IUA) to meet the students and teaching staff. 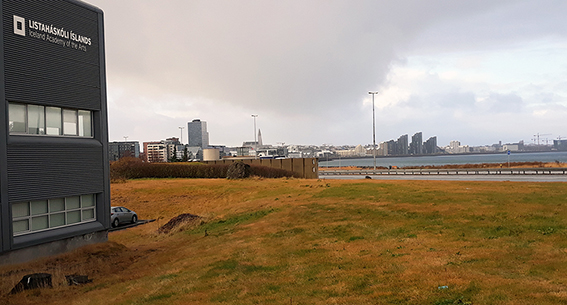 IUA is situated about 5 km from the center of Reykjavik at a seaside. The university is a self-governing institution providing higher education in fine arts, theater, dance, music, design, architecture, and art education. All departments are situated in the same building. Students have their own studio spaces and there are some lab spaces, for example for sculpture, painting and AV-equipment available too. IUA offers BA and MA -level education and is part of our exchange program on BA -level.

"I had a very interesting time meeting the fine art -students discussing the topics that they work on. We all took part in Olafur Eliasson (an Icelandic-Danish artist) SOE Kitchen communal project, for the artist talk and lunch by OE. I also gave a public talk of my own work processes in IUA and the place was packed! I totally recommend IUA as a choice for exchange, especially if you are interested in environmental issues and ecology."

From 9.9.2018 until 14.9.2018 I participated in Cartoon Forum in Toulouse, France. It was a really big animation event that gathered investors, other business people, producers, animators and students together. In this forum, a lot of companies pitched their projects that were in different phases, some more finalised than others. This year Finland was the spotlight country and it was funny to see clips from Finland by e.g. Finnanimation that were shown during breakfast and lunch, on all the forum days.


On Sunday, I arrived together with a few classmates in Toulouse, and rested and explored the city before the forum that started the next day.

The first day of the forum, Monday, was a kind of “Welcome day”. We got welcome bags with Cartoon Forum things and had a few lectures about how to make a good pitch. The first pitch was held by Anttu Harlin, CEO/producer at Gigglebug Entertainment. The second lecture was held by Petteri Pasanen from the animation company Anima. Both lecturers gave insight in their own company, which was really interesting. After the day, there was a big welcome dinner at Les Abbattoirs, which was really fancy, and we got to practice our networking skills.


On Tuesday all the pitches started. During the breakfast Croissant Show, the trailers for the pitches before lunch were shown, and during lunch the pitches that were in the afternoon were shown. This is how the next two days also worked. It really helped me choose which pitches I wanted to see. I started to write down notes during each pitch, so I would remember as much as possible. I paid a lot of attention on how people gave their pitches, and what separated the good pitches from the bad pitches.

On Wednesday after all the pitches there was again a nice dinner, and the possibility to dance if you wanted to. I got to know some French students, which was fun. It was a good way to practice my networking. Thursday was the last day of the pitches, and the day ended a bit earlier than the previous days. In the evening there was a great Finnish themed farewell dinner with some karaoke, which was really fun! On Friday we travelled back to Finland, after a very nice trip! We were many experiences richer than before.


Overall, what I learned and gained from this trip, was how important it is to have a good pitch when you get so far as Cartoon Forum or some other big event like it. It’s so frustrating to see talented people throwing away their chance of getting investors, distributors or coproducers, just because they haven’t prepared their pitch at all. You can have a lot of talent and great material, but if you can’t show in a convincing way the reason why somebody should invest in or work for your project, you are walking on thin ice.

The most common mistake I felt in a pitch was that people talked about irrelevant things that didn’t have anything to do with the project itself. For example, a presenter for the animation project “The Snores”, bragged for many minutes about all the awards her animation company had gotten. Not a good start for the pitch. The best pitch I remember from the event was for an animation series called “In your Face”. The pitch started with a woman telling a story that sparked her idea for the animation. She made the audience laugh, and had very clever remarks. The pitch was engaging from the start until the end.


I learned a lot from this trip, and it was really a once in a lifetime experience.

The first XR Challenge event was held at Mediapolis on Tuesday 18th and Wednesday 19th September. It was organized by Business Tampere and Virtual Reality Finland in collaboration with TAMK, Business Finland and Leonidas, a local company specializing in web and mobile solutions as well as VR and AR implementation. At TAMK the people in charge of production were Jukka Holm and Timo Kivikangas.


The application period for the challenge and the organization itself for the event was earlier this year in spring. Eight finalist teams were chosen from roughly 40 applicants from numerous countries who submitted their initial concepts and ideas, to present their full demos at the event.


With the challenge portion itself being held on Tuesday, six teams that made it to the finals presented 10-minute pitches about their solutions to the range of judges. The jury included representatives from the three participating finnish industrial companies: Valmet, Fastems and Glaston, as well as Leonidas.


The teams presented a variety of carefully planned and developed solutions to the issues presented by the three companies. After the pitches, the finalists presented their demos at their stands in the exhibition area, and the judges met up to discuss and decide on the winners of the challenge. 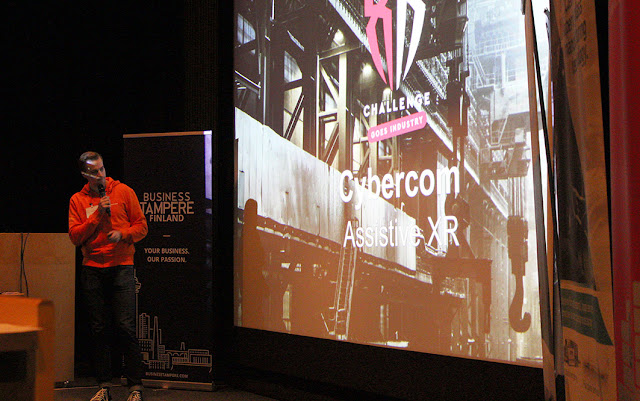 Day 2, Wednesday, consisted of the open XR seminar, hosted and moderated by writer, actor, improviser and producer Trent Pancy, and an exhibition with 30 different stands showcasing a variety of virtual, augmented and mixed reality demos, gear and solutions. TAMK also had a presence at the exhibition: guests were able to explore a VR art exhibition and a 360º-music video by students from Media and Arts, and a ‘virtual forest’ created by main campus students. 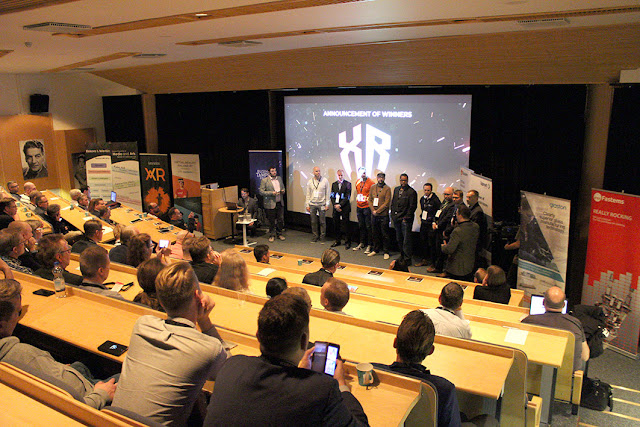 In the afternoon, the winners of the challenge were announced on stage at the United Studio. The finalists competed for a total prize sum of 40,000€, with second and third place each receiving 5,000€, and the first place winner getting 30,000€.


Voconaut, a team consisting of sound designers and web developers, claimed the first place prize with their augmented audio technology. It is designed to be utilized in factory environment, allowing for a number of improvements and advantages in different areas of production. The aim is to create a ‘full sonic layer for the client’s environment’ to solve and minimize issues like growing work spaces and visual technology distracting and requiring employees to attend to screens for information. The vision is for ‘ears to become the new screen’, which lets workers receive information tailored to specifically to them on-the-go, resulting in better focus on the task at hand.


Following the announcement of the winners, the seminar continued with lectures from multiple speakers with expertise in the field of VR/AR/XR. The first to speak was Steven M. Lavalle, who is currently a professor at the University of Oulu. He was an early founder american technology company Oculus VR and is the Chief Scientist of VR/AR/MR at Huawei Technologies. His lecture, titled ‘The Harsh Realities of Making XR’ explored the numerous limitations in the field, such as issues with perception, comfort and wirelessness.

The second speaker was Antti Kuosmanen, Surface Business Group Lead at Microsoft, with a presentation titled ‘Digital transformations and Mixed reality’, who gave an insightful introduction to the context of digitalization and the steps that are required for developement.


The final presentation was by Markus Heinonen from Varjo Technologies, regarding their solution to the certain issues when it comes to VR such as the narrow field-of-vision which was mentioned by Lavalle earlier in the seminar. Their solution was inspired by the ability of human vision to show clearly and in detail the area which is being focused on, while everything on the periphery is much less detailed. ‘Bionic display’ is the technical implementation of this function, allowing for clearer visuals.


The seminar was livestreamed on Youtube and can still be watched at: https://www.youtube.com/channel/UCYe-eWx16FHemRgvWblJPyA


The seminar day concluded with two workshops, one held by XR developers Kari-Pekka Lammi and Jari Nevala from Leonidas, and another by Mika Isomaa, Developer Relations Engineer at Unity Technologies.


All in all, the event had a great turnout with a full house during the seminars, and a range of interesting displays and presentations about virtual, augmented and mixed reality technologies, and will hopefully be organized again next year to give more opportunities for those who are interested in the field, as well as the experts who can apply their knowledge and companies that employ these technologies to better their business.

Article in Finnish on the event by Business Tampere Magazine: https://businesstamperemagazine.fi/artikkelit/xr-challenge-toi-ihmiset-ja-ideat-yhteen 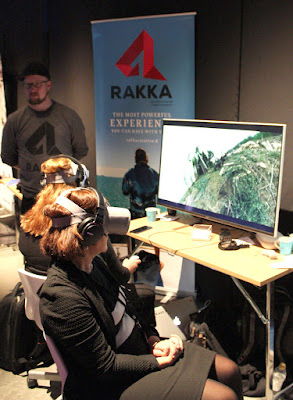 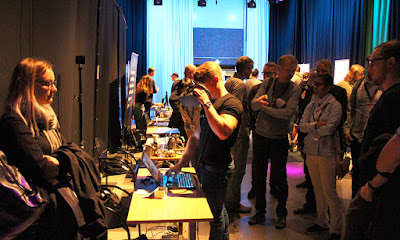 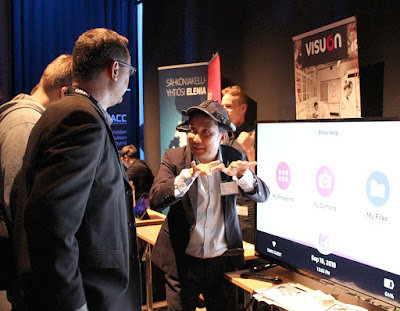 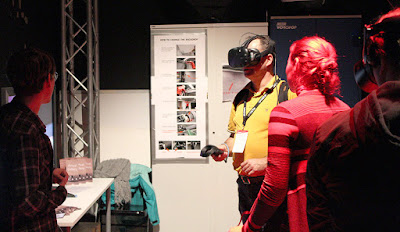