The very first Introduction to Photography course took place in the beginning of November 2014. This was the first photo course in the new Fine Art Study Path.

During the course, the students made three exercises: two portraits and a main task , which was A Sketch for an Art Work. In the end, we had a final critique session, where everybody presented their work.

Animation & Visual Design Workshop is a Media and Arts evening course, started on 10th September and will be continued until 19th December.

We explore the visual world with different themes in this course. The course is separated into two parts. The first part of the course was 3D, Blender, classes held by Tuomo Joronen. It was a great opportunity to experience Blender once again. Tuomo provided walk through of using the nodes, sequence editor for combining and editing different scenes and adding sound to renders, etc.

And now Carita Forsgren took the lead and the topic has changed from creating blender animation to the animation connecting.


The topic of the last class was gesture drawing. We drew our hands, other random objects we chose to draw without looking at the paper and it was very challenging as you can imagine. We also had 30 seconds quick gesture drawing challenges. Carita and each student took turns and posed for others.

Ikuinen Gallerys traditional Christmas sale is arranged in an untraditional way this year. The most notable change is the new address. The gallery has moved from TAMKs department of Media and Fine Arts in Finlayson to Tohloppi. The gallery has no space of its own anymore, so the sale will be held in pop-up spirit in the TAMK lobby (to the right from the front doors).

Not all traditions have been shelved: the sale products are as magnificent as always: art, cards, handicrafts etc. You are warmly welcome to explore and make purchases for both yourself and Santa Clause.

Ps. Unfortunately we don't take “plastic money” , so please remember to bring cash with you. 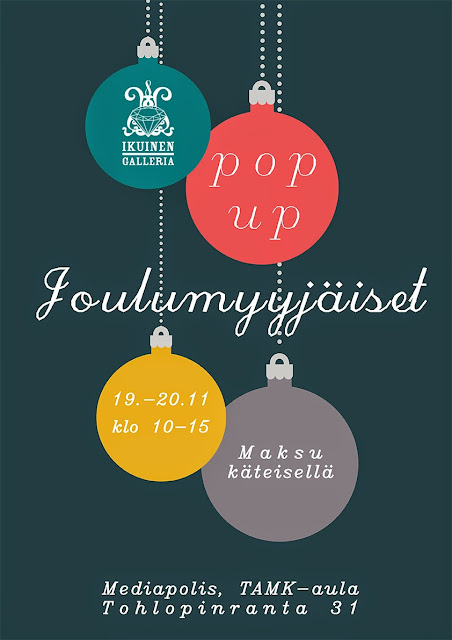 MindTrek is slowly (or quickly, depending on how much fun you're having) getting to its end, now.
Ted Selker from MIT Media Lab starts his keynote on New Technology Business Creation. 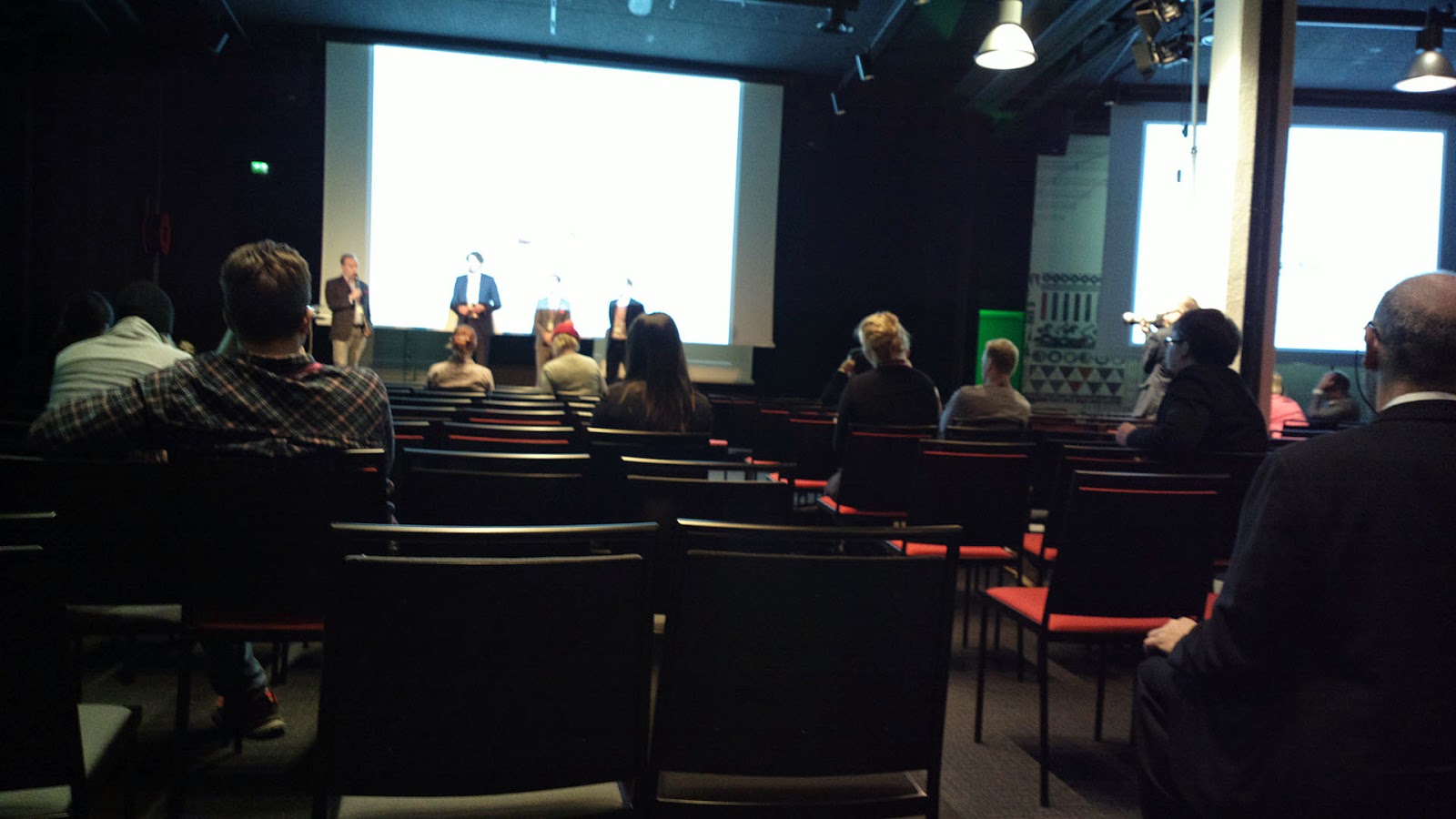 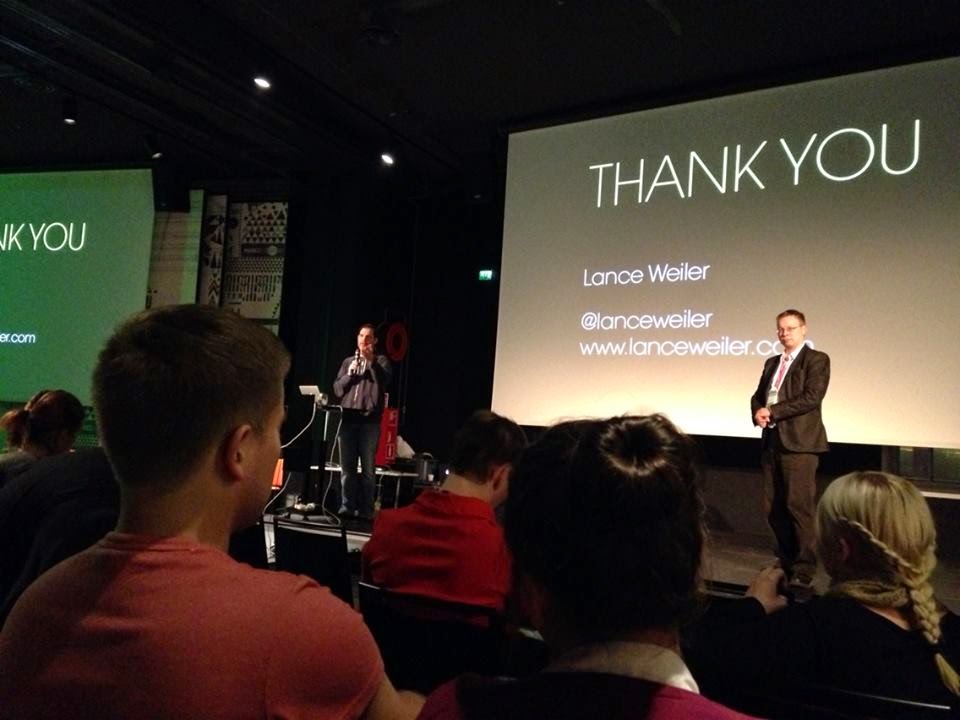 Earlier, many of our students participated in the workshop by Lance Weiler, on interactive & participatory storytelling. There were many fun moments there, when we shaped crime stories based on Weiler's new project called Sherlock Holmes & the Internet of Things.


Also Philip David Harvey's workshop on Data Landscaping made us think about data acquisition in new ways, and Jonathan MacDonald's keynote speech on why established companies often fail to see changes happening around them got both positive and critical comments.

The new Hotel Torni is a really nice location for MindTrek, with its spacious yet not daunting conference halls. I couldn't take part in the MindTrek party on Tuesday evening, but I did hear it had been very good.
But now I should really concentrate and listen to Selker's keynote! 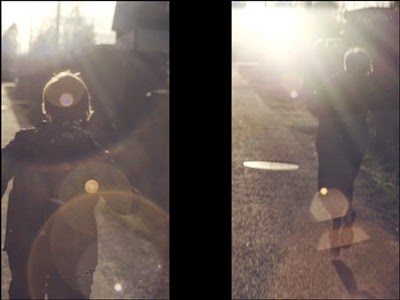 
A young school boy is running away. The camera focuses on the person and the images are slowed down. Niemi-Junkola is interested in social power relations and the borderline between private and public. The starting point for the work were experiences of personal space in school environment that can be cruel.  However what comes across in the video work is sense of hope, almost dreamlike lightness of being.


Fanni Niemi-Junkola, who some of you might know as a lecturer of Fine Art in Tamk, held her opening night last Thursday in Helsinki, in MediaBox, Forum Box, Helsinki.

Fanni was presenting a video artwork titled "Way to school/Koulutie".
The singe channel video, presented on a 30 minutes loop, was very sweet,portrays a boy running towards the sun's brightest light. While watching you almost get a feeling of relief, of lightness and joy: you understand how the little boy is feeling. Because you have been that little boy, running in the sun, in a beautiful summer day, smelling the leaves and feeling the sun's warm rays on your skin.
Sami Sänpakkilä's music completes the experience, and you almost don't want to leave the video box, because outside the world is grey and sad, while in the box is full summer.

Fanni is very much interested in the social role that art can play; with the cooperation of TAMK and of two comprehensive schools in Tampere(the Kaarila School and the Finnish International School of Tampere)she managed an art project intended to give voice to the pupils. The aim of the videoworkhops was to let the students express their anxieties and issues on their everyday life at school.
The works are surprising, and inventive.
For more information: http://www.voimavirtaavideolla.net/english/


In many cases, the point of view of an artist might be more refreshing and effective than the usual "classic" way;working as an artist allows one to be more creative and explore different options. In TAMK's new Fine-Art study paths students are encouraged to have an open attitude towards new possibilities that are not so obvious in Fine Art practise.

About Forum Box: Forum Box is a beautiful art space, owned by a cooperative of artists, founded in 1996.
It was originally a cold storage room, and was renewed by the artists themselves and opened with a smashing joint exhibition in cooperation with Kiasma, featuring Richard Serra and Anthony Caro.
Nowadays the cooperative counts roundabout 80 artists, and rents the space for solo or group exhibitions, if some fellow students are interested, the deadline is March, 1st 2015 for exhibitions to be held in 2017.
Mediabox is an exhibition space for small video screenings. The works are created by Forum Box in co-operation with AV-Arkki, the distribution centre for Finnish Media art.


Very many compliments to Fanni, and wishes for the best-and next time Fanni will have an exhibition TAMK blog will tell you again about it.

The project dates back to the 1980's when Pinsiö's local residents asked the artist Osmo Rauhala to help them with fixing an old gravel pit that was spoiling the landscape.
Action was taken quickly, and a committee to solve the matter was created; it was the first time that in Finland, artists were directly asked to solve environmental problems.

Nancy Holt and Agnes Denes were part of the committee, and last week the class visited Deneses “Tree Mountain” and Holt's “Up and Under”.

Deneses work, “Tree mountain” is site specific, and it's an example of cooperative art. Some 10.600 people planted a tree, which they will own for life. It is not allowed to sell the tree; it can, however,be left as a heirloom upon death.
The concept of “ownership” of a tree is a very subtle one, as the tree can never really be owned, being part of a forest and firmly rooted to its spot-the owners don't really possess the tree in a physical way, but they have a sort of moral obligation towards the forest and what it represents.
As the trees grow, the mountain slightly changes its shape and appearance, and eventually the trees will outlive all the original creators and custodians, and probably they'll even be there when the whole project and the whole philosophy behind it will be totally forgotten. 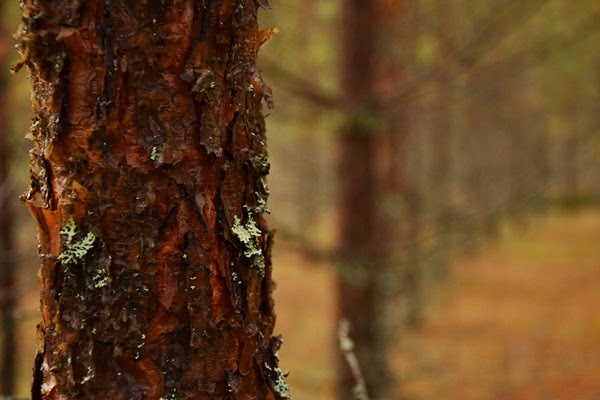 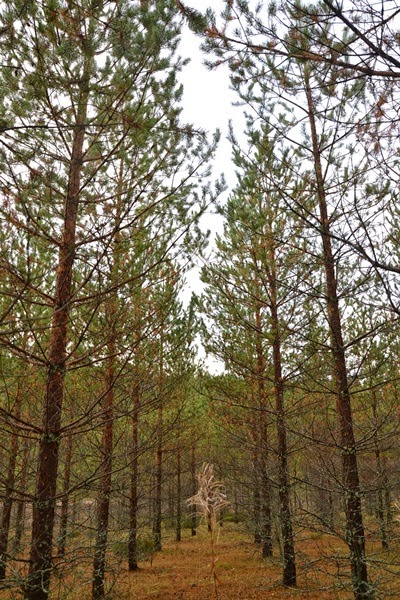 The road between “Tree Mountain” and “Up and Under” was supposed to be an easy 3km walk.
What actually happened, is that our happy little group in between chatters and laughters got almost completely lost, ending up in Pinsiö model airport(lennokkikenttä).
As art students, we lived up well to our stereotype. Far from being anywhere close to despair, everybody just enjoyed the adventure and started making artworks and photos, as if the fact of being lost in a fairly deep forest was nowhere nearly as important as making up new artworks. 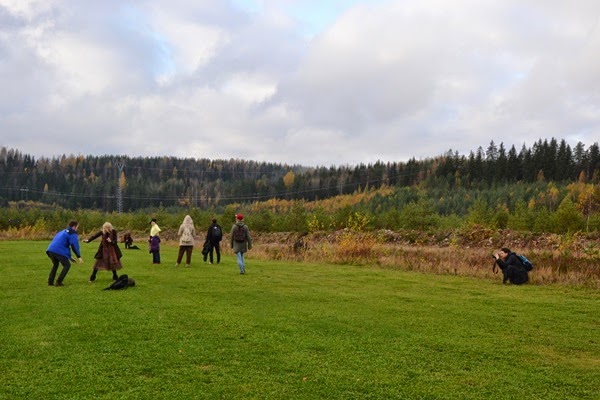 After more walking, the group finally found some signs of civilization(and some ice-cream).
Eventually we made it to “Up and Under” where few classmates had already set up a fire, and we grilled some sausages and had a little rest from the two and more hours of walking. 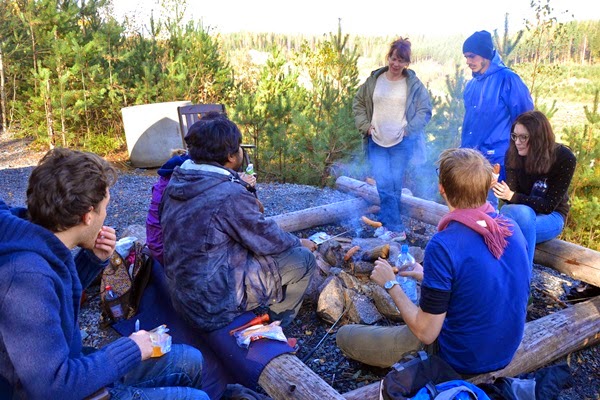 “Up and Under”, created by Nancy Holt, is built to specifically follow the light and shadows of the site. 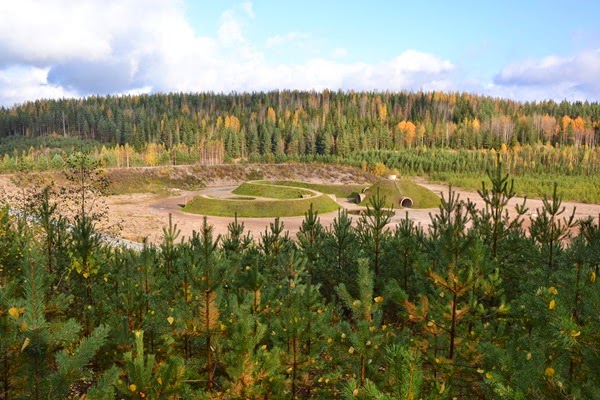 It is formed by seven tunnels(four of which are aligned east-west and three north-south, following Polarises orientation)and three pools(one of which was empty, alas).
One can experience the sculpture from different point of views: from under the tunnel, up the top,over the pathway or even from afar.
The sky is part of the piece itself, because it reflects in the pools, is clearly visible from the horizontal tunnels and can be also seen from the vertical tunnel. 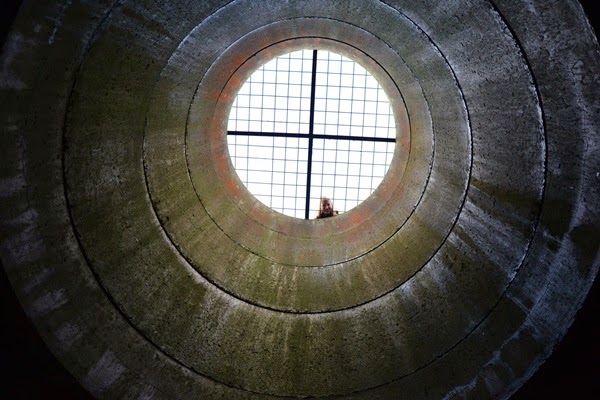 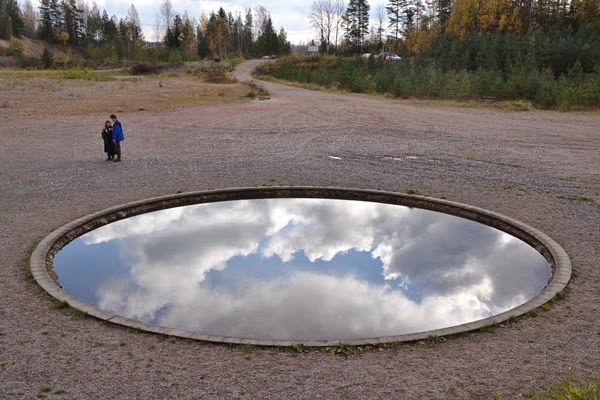 In this artwork, earth, light and the sky are all one, and can all be experienced at once.
In the artist's concept, the artwork could also function as a gathering place for the population, making it a key element into town life.