Christmas is upon us which means the Media and Arts pre-tasks have now been published for the next application round! The application window opens on the 9th January and the applicants will have until the 24th January (3pm Finnish time) to upload their pre-task. The applicants are reminded that they must choose the pre-task designated to their chosen study path and must only submit one. The pre-task is graded out of max 100 points and if successful you will be invited to the online interview! (maximum of 120 applicants with the highest pre-task scores will be invited.) The interview will be done using Adobe connect.


If you are interested in applying to one of our degree programmes, check out the following links giving you more of an insight to what we get up to:

The presentation videos from all study paths:

This blog post is about our trip to Graz, Austria, in order to attend to the European Youth Awards 2017.


We left Tampere in the middle of the night, on Tuesday the 28th at 3am. We had an early flight to catch in Helsinki and a long way to go before we got to Graz. After two flights, a 3-hour-long wait at Munich Airport and a short train ride, we finally made it to downtown Graz. Our hostel was quite near to the railway station on which we arrived, so that was great!


On our first day there, we were all quite tired form the trip, so we did not much in the way of sightseeing. We just went out for a stroll around town and looked for good places to eat.


Graz is a lovely town, has about the same size as Tampere, but a rather different “feel” more ancient and “continental”. Also there were Christmas markets everywhere! 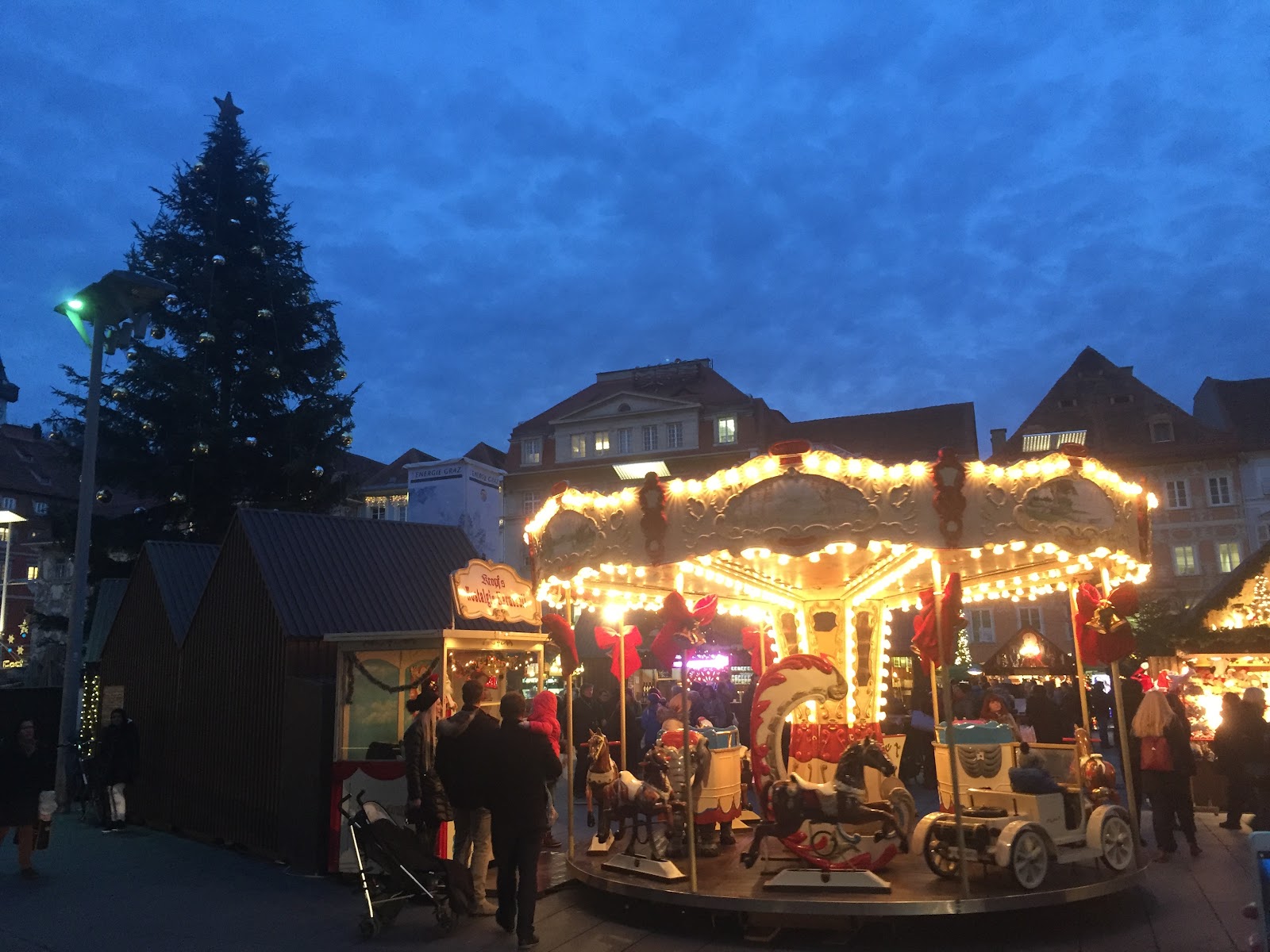 
On our second day we had more energy, which was good, cause we had a scheduled visit to FH Joanneum, the applied sciences university in Graz. We headed there in the morning and met Prof. Dr. Konrad Baumann for a coffee first, in a cafe by the university building, and then for a short session showing some usability test work. After that we met with Karl Stocker for another session where we were shown thesis works done by their students. There were some pretty nice animations. It was suggested we could come back to Graz for our exchange semester.


After that it was time to register and get our credentials for the EYA. That went smoothly and then the only thing we had to do was head to the opening sessions.
There were two different opening sessions on Wednesday, first we had a creativity workshop in the “Island in the Mur”, an interesting cafe located in a bridge atop the river Mur. This was fun, as we got to do some artistic creative work and meet some cool new people! 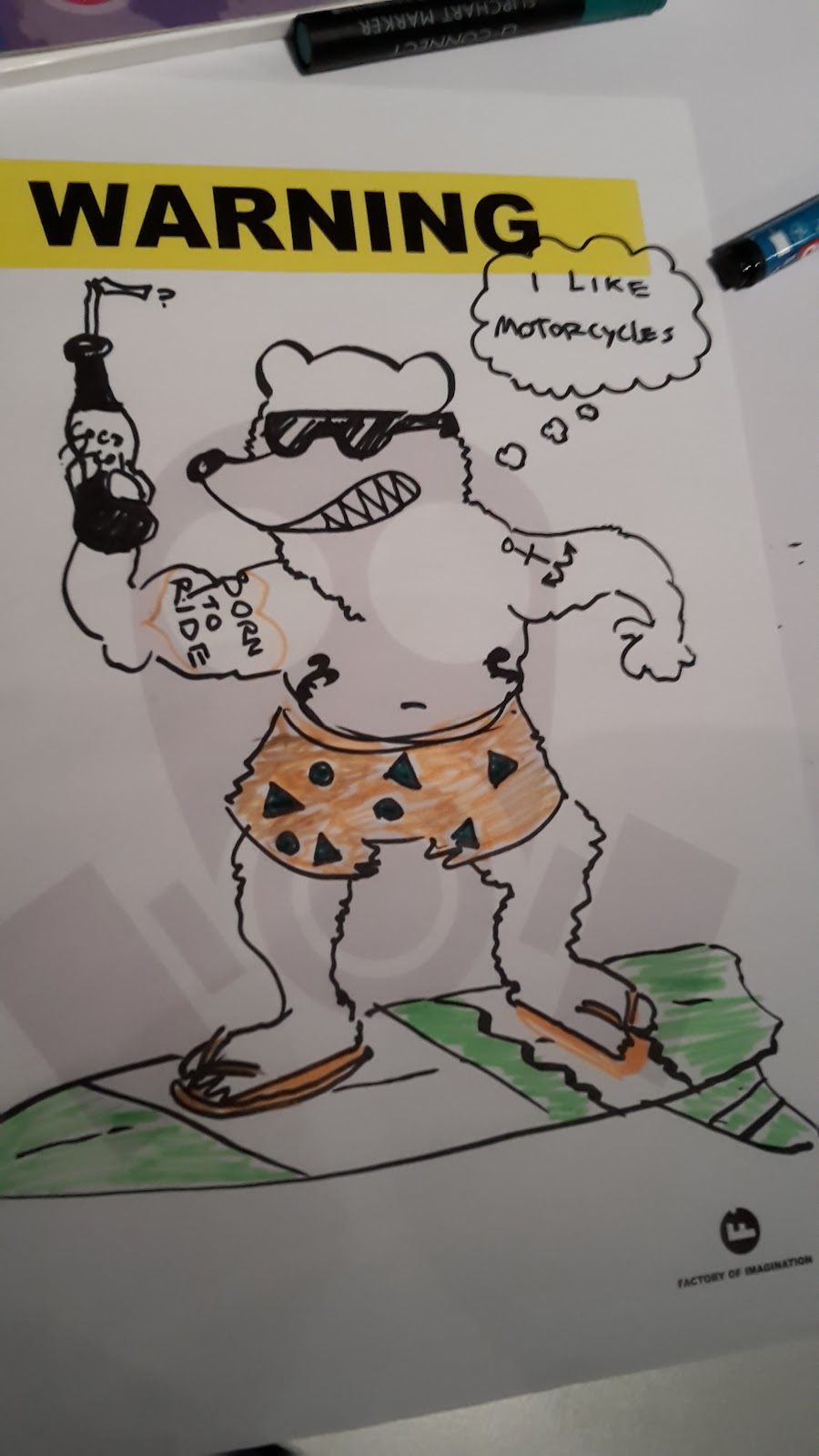 My group did this!

After that we had a more solemn opening session in the city hall. The winners got their awards and there were snacks and wine. Unfortunately all the snacks were meat, leaving little option for the 3 vegans/vegetarians among us. 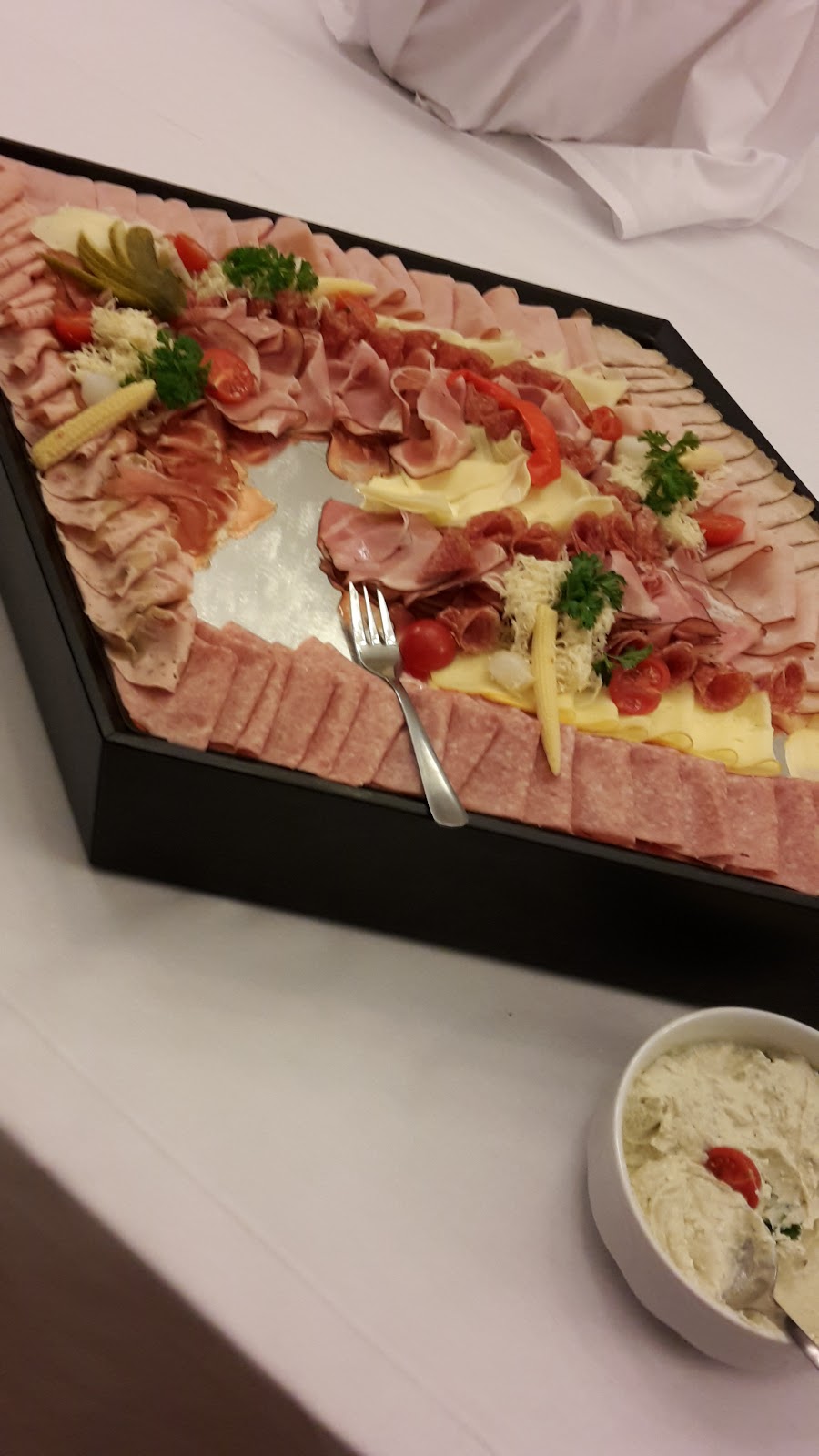 Seriously guys, this much meat is just not healthy.


Thursday was a very EYA heavy day. In the morning there were the campfire sessions, which one of us attended, and then there was a presentation about creativity and entrepreneurship. The presenter was a bit repetitive, but he did get his points across. Here is a picture of it. 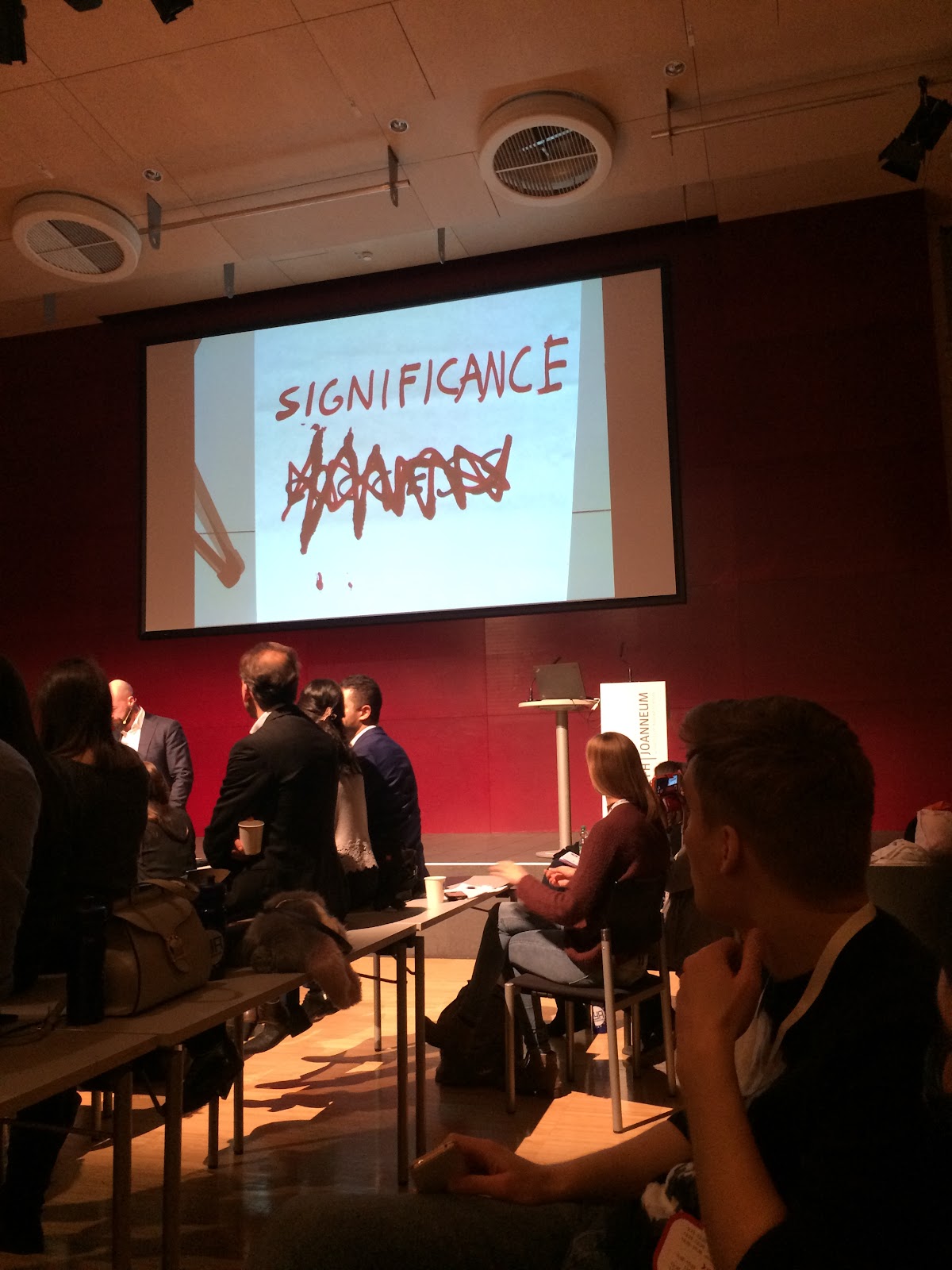 There was a lot of scratching over words in the presentation


After that there were some workshops. Unfortunately none of the workshop themes were really related to what we are doing. Some of us used that afternoon to take a tour of the Armory museum in Graz, which could only be visited by non german speaking people at 1pm. There they/I got to see some cool armour and weaponry that can be used for concepts in the games we are working and plan to work on! 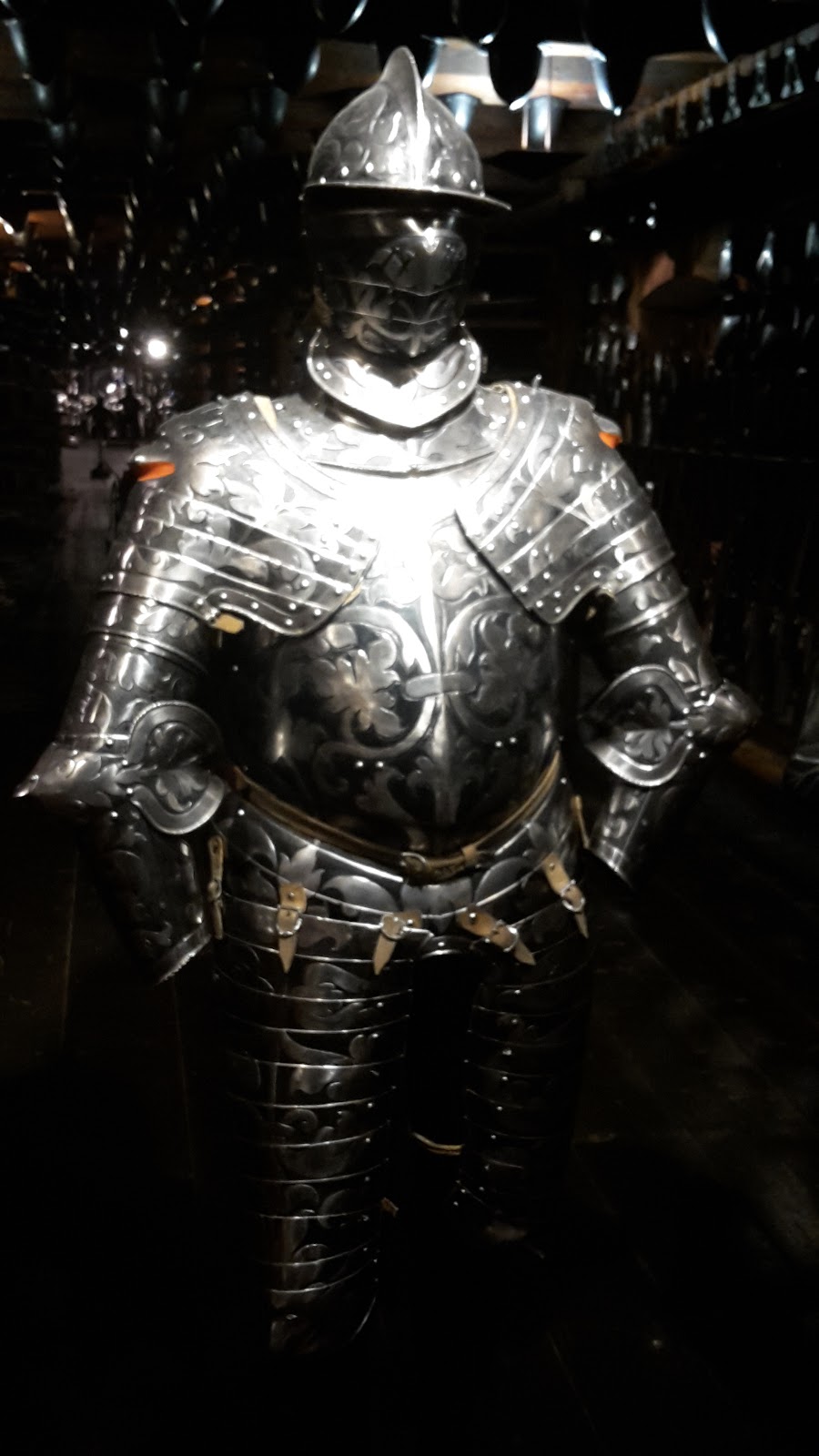 This is some fancy armor!


After that we had a long session, where all of the EYA 2017 winners got to show off their projects and answer questions about them.


In the morning of our last day at the EYA we had  some group work in the Europa Hotel, where we were supposed to sit in tables with strangers and discuss micro networks, what makes them good or bad and so on. It was a bit confusing, as most of us didn’t have much experience with that part of business management. But we got to meet new people and talk to our team members before we did our presentations. 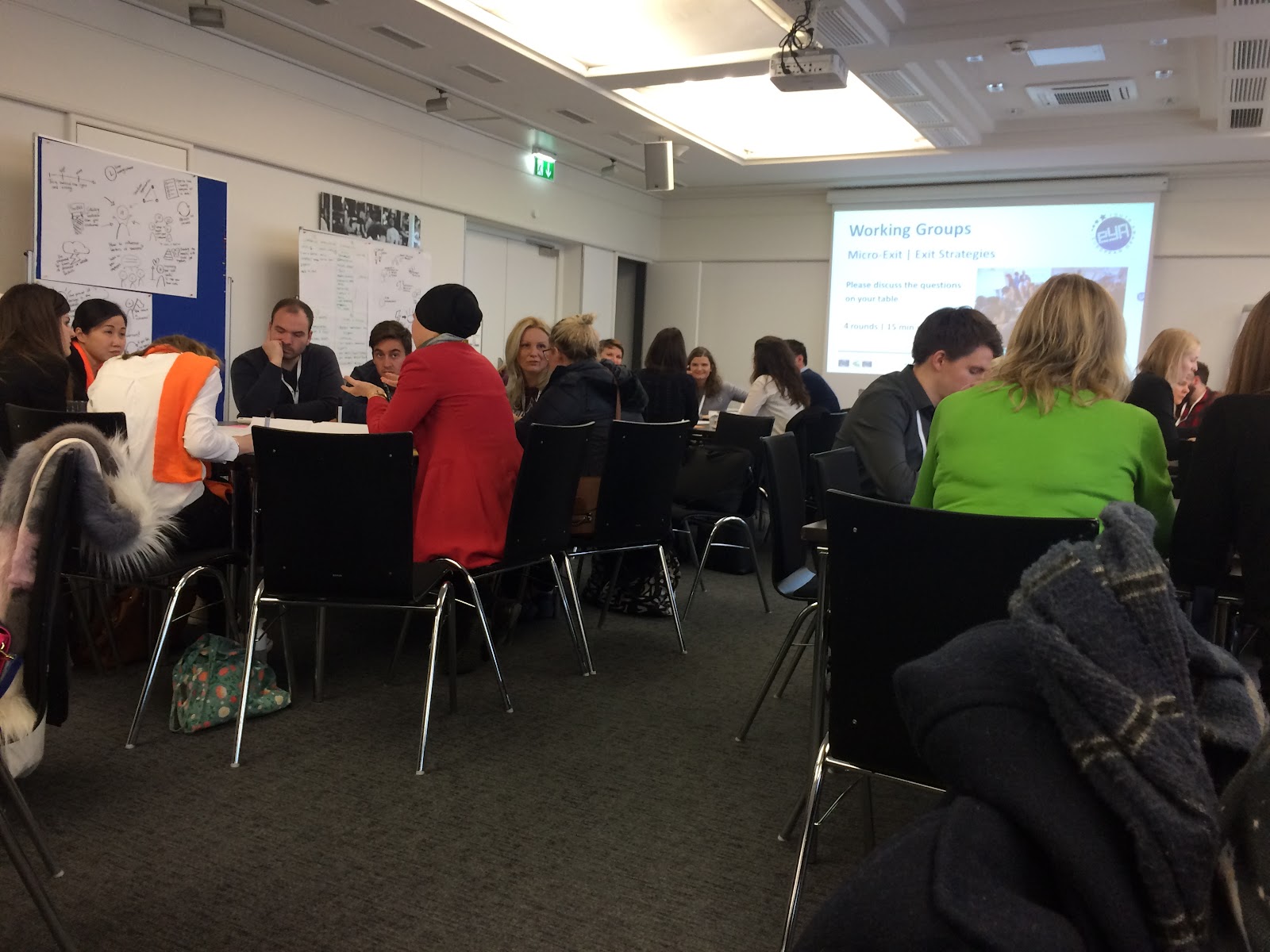 After that we took buses to the Styrian Chamber of Commerce where we had lunch and then presented the projects we had been working on previously. This was a bit tiring cause we had to stand for a long time and answer a lot of questions. But it all went well, unfortunately a member of my group, who did our poster, was not capable to come and present her work with us as she is an exchange student at TAMK and was not allowed to get a grant. This is me and my group and the person who made the app we talked about.

After that we had the final Gala where more prizes were given and there was some entertainment acts. They were quite fun, both the dancer and the beatboxer. 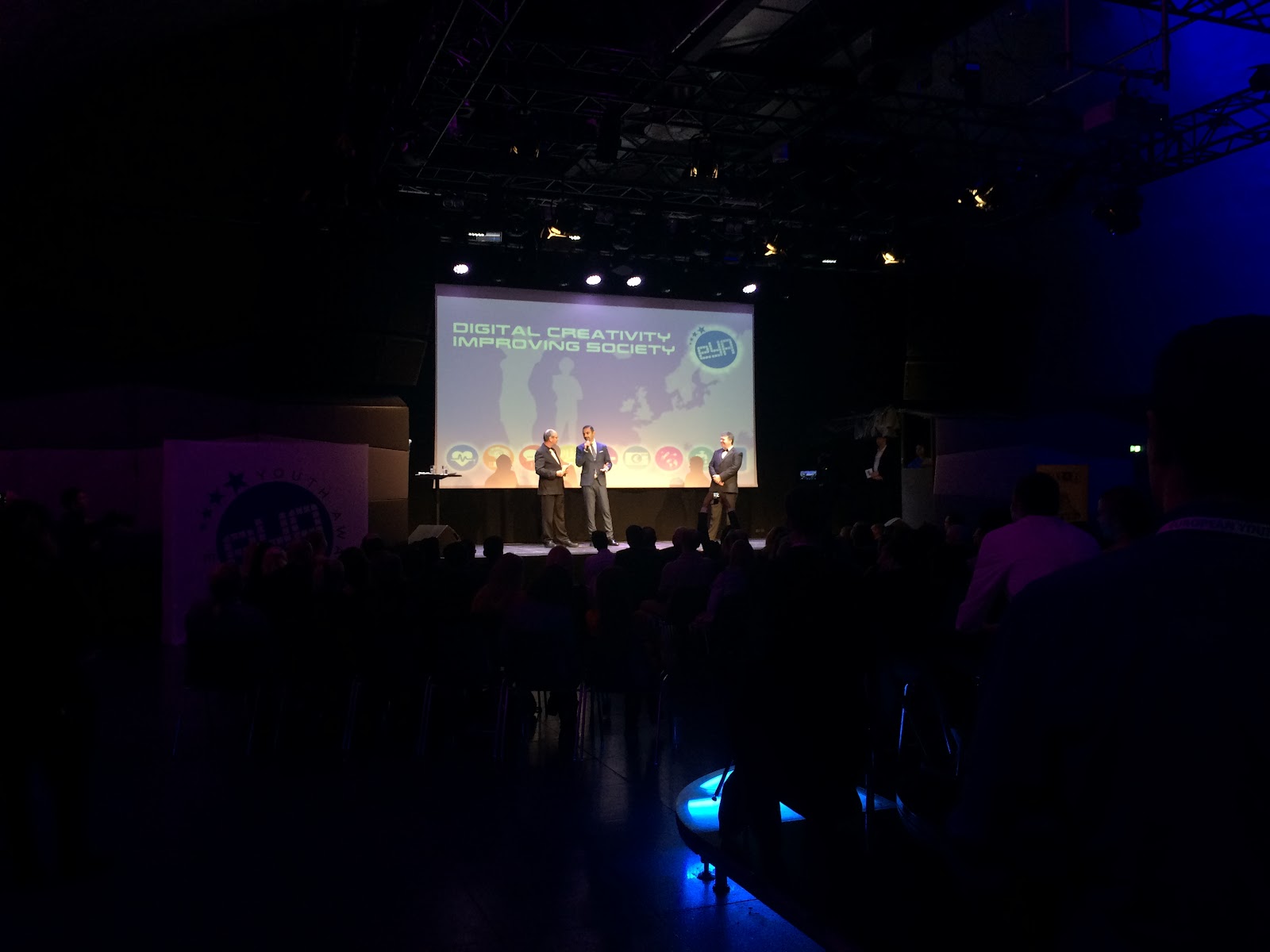 There was a lot of talking.


Finally, the chairs were taken away and there was a party, which was also quite fun.


On our last day in Graz, we checked out of the hostel and then went around Graz to buy some souvenirs for our family and loved ones and people in general we would like to buy a souvenir to.
We did not have much time for that, though, as we had to take our plane back to finland.


The way back was a bit longer than the way to. We had to wait for one extra hour, makin it four hours total, in Frankfurt airport this time.


It was good getting back home, but the experiences we had in Graz will always follow us and stay forever in both our hearts and minds.


Finally I would like to send a special thanks to our sponsors in this trip, Viesti ry, Taku ry and Ammattiliitto Pro! Thanks!

As part of the Introduction to Applied Fine Art course with Fanni Niemi-Junkola, first-year students from the Fine Art study path of the Media and Arts programme visited the land artworks in Pinsiö. These works are part of the Strata landworks.

Tree Mountain is a site-specific artwork designed by Agnes Denes. It is a steep gravel hill and there are about 10,600 pine trees in the artwork. Climbing to the top takes 2-3 minutes. At the pinnacle, there is space for about seven people to stand comfortably. The huge amount of snow added to the overall magical atmosphere of the work. 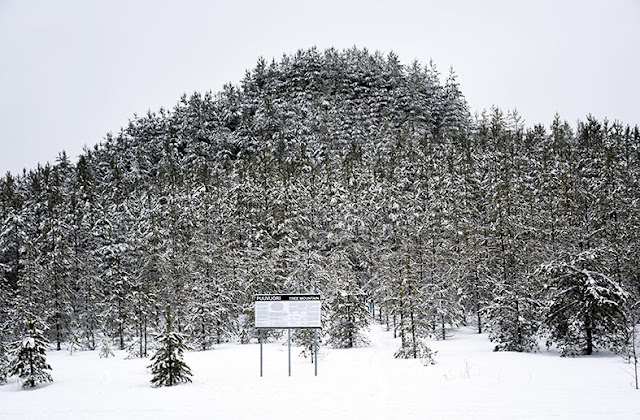 Up and Under by Nancy Holt involves concrete tunnels and connected earthworks that can be climbed on. One can go inside (under), or climb on top (up), and thus the title. The snow added an extra layer of interactivity and also highlighted the inside/outside areas of the piece. 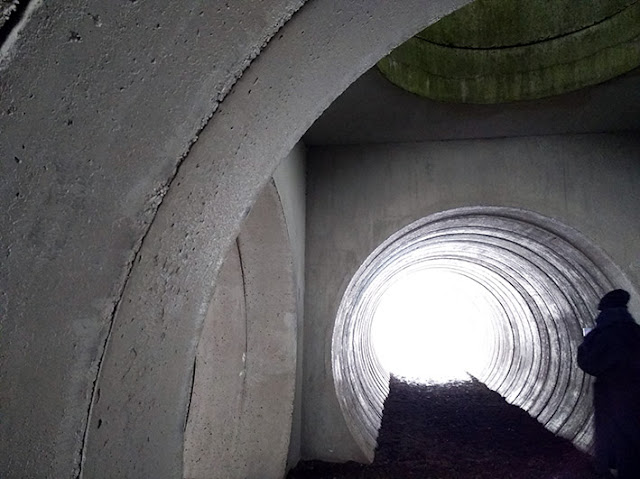 Me-talo (in English “we-house”) is collaboration project between Me-säätiö (“We-foundation”) and the city of Tampere. Me-talo is created to bring people together to learn new skills and just to have quality time together. The goal of me-talo is to create communality and promote well-being. Peltolammi school started to have workshops and events 28th of October 2017.

TAMK´s students of communal-based art course held three workshops in Peltolammi during  the fall. Events were free for everyone to join, but they were especially created for children. Themes for the workshops were communal painting, costume/photography workshop and gingerbread workshop.

The children told us stories about how they spend their Christmas and what they hope to get from Santa Claus. There are plenty of toys that I had never heard of! Even I got excited (again) about legos, while listening to their stories! In the communal painting workshop, the children could freely create one big painting together. The theme was “creatures”. Many of these creatures got their own names and background stories. Together they created their own funny world, in which they were friends and “visited” each other. 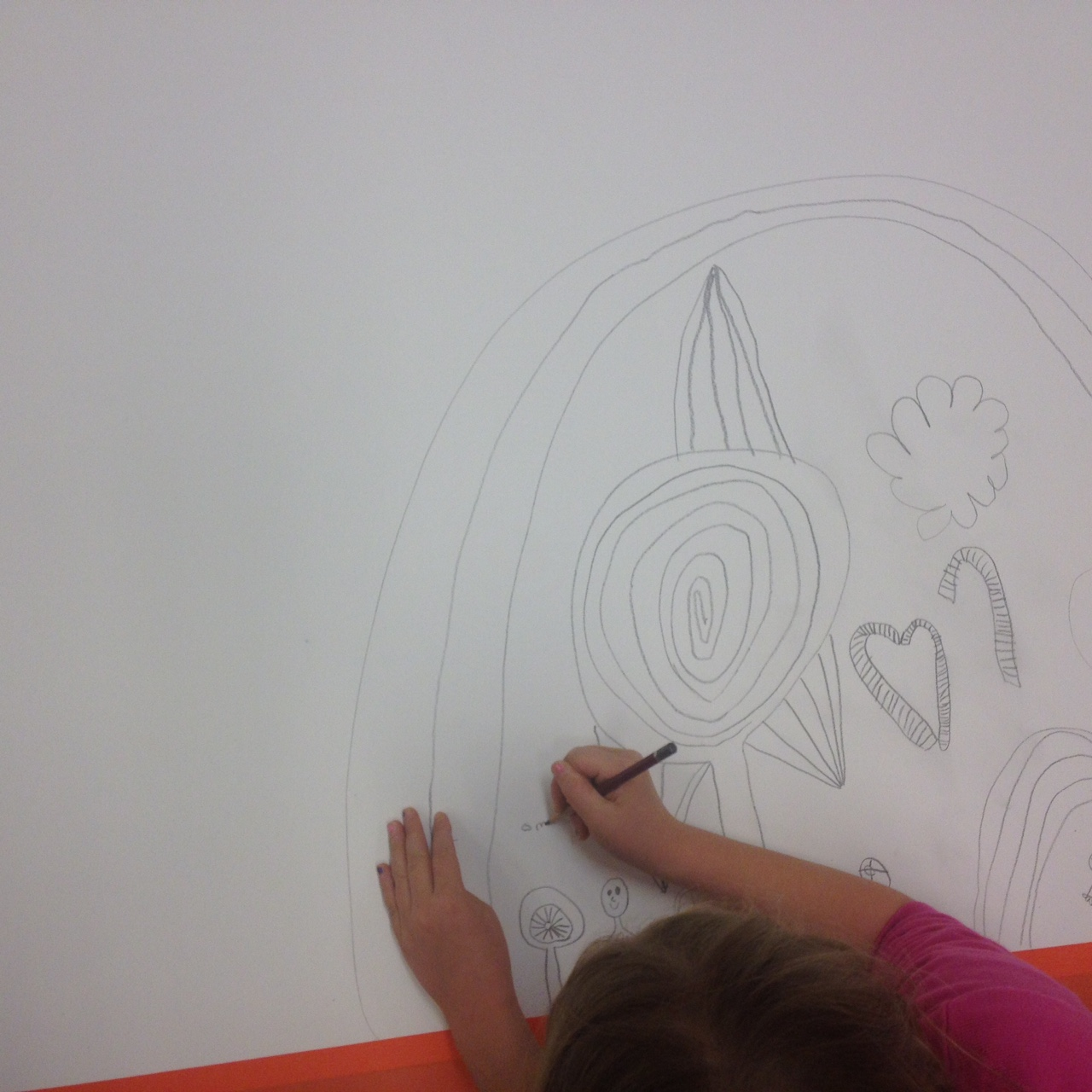 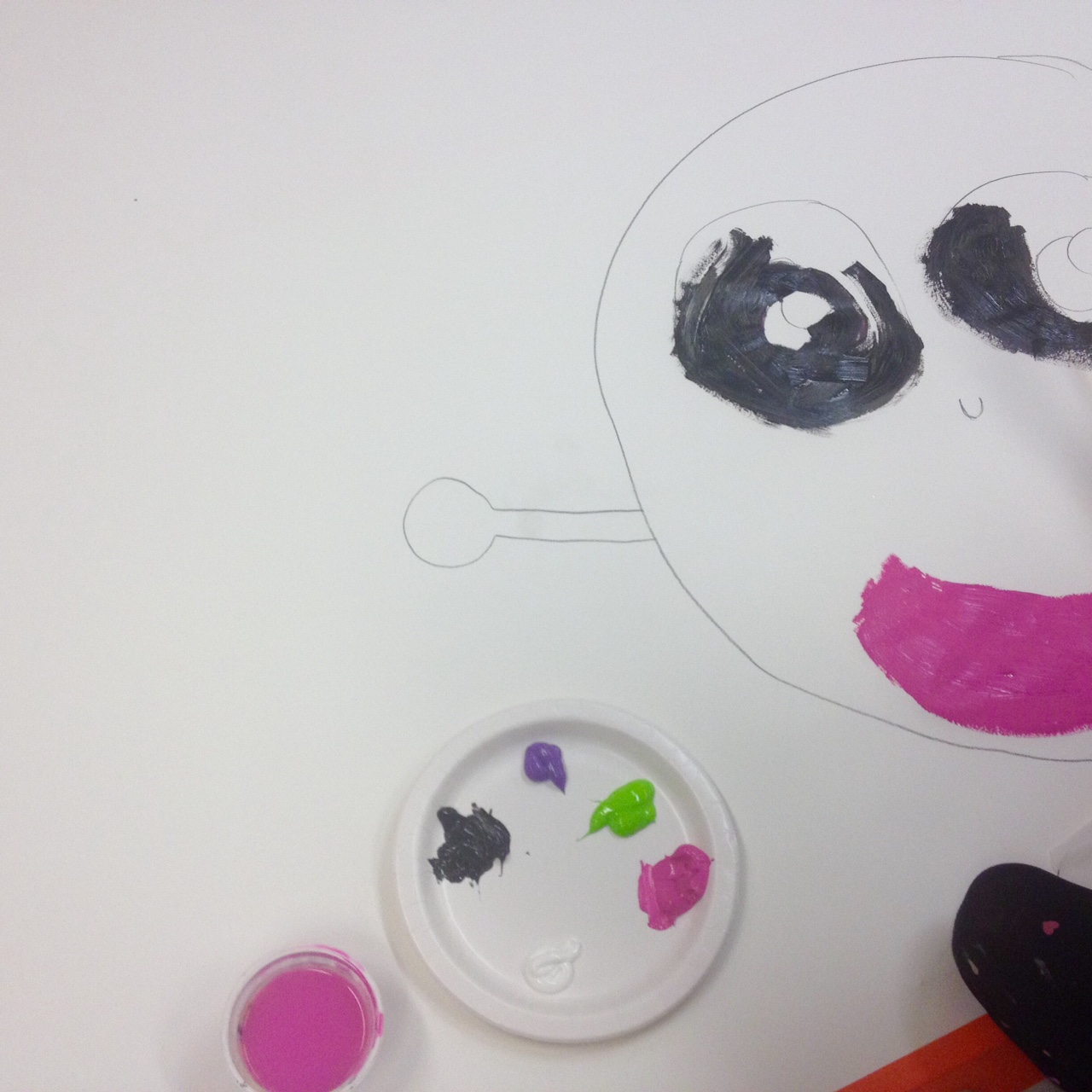 In the costume workshop the children could dress up in different costumes and take photographs of their outfits. Our students got excited about this workshop too, and didn´t remain just workshop tutors, as you can see in the pictures. The gingerbread workshop was especially Christmassy. Children had to learn to be patient with gingerbreads, because they break easily. One should not just smash candy through the roof (note to self, too). The children seemed to have fun and they enjoyed the creative work. The end results were also delightful! 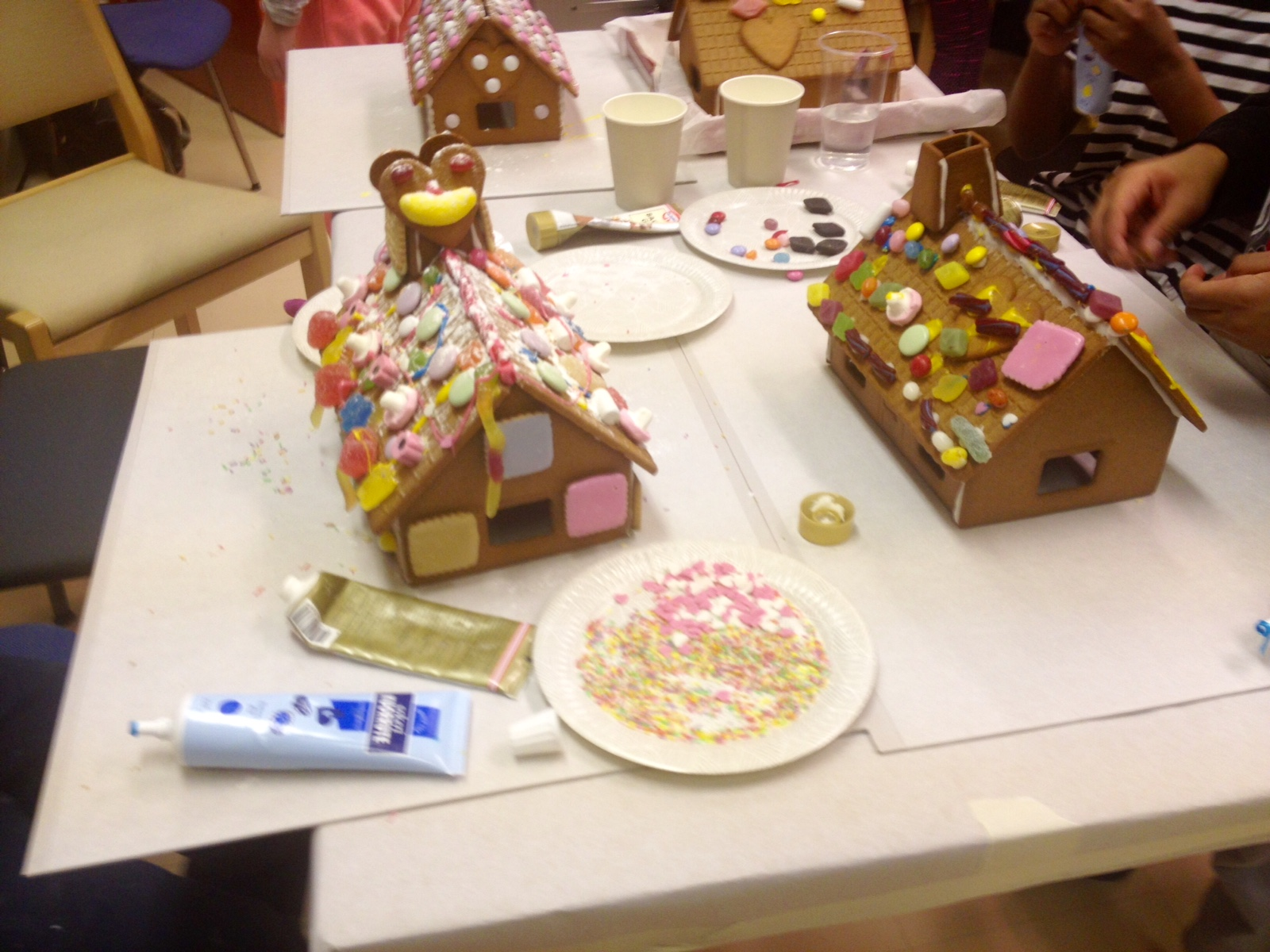 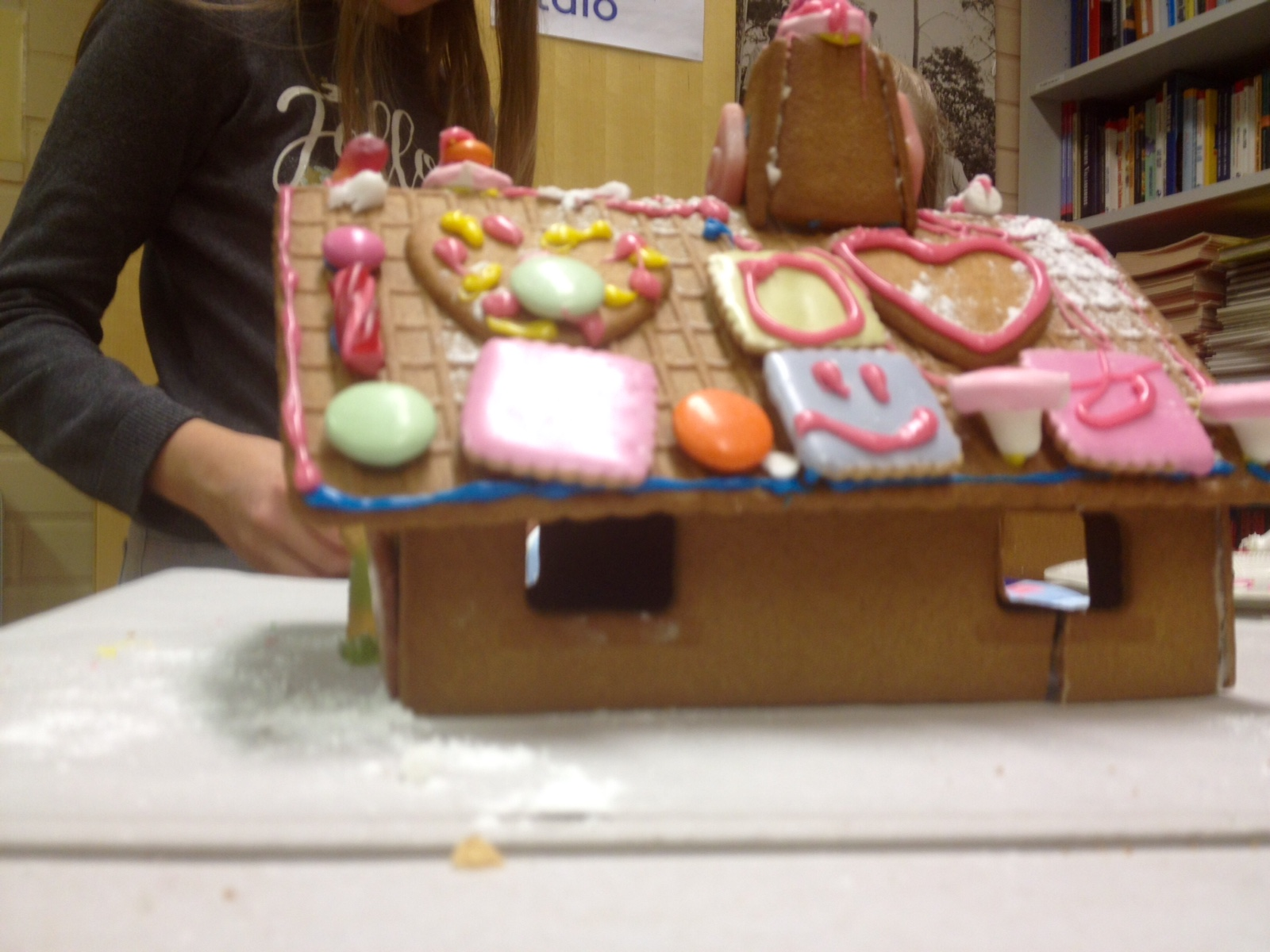