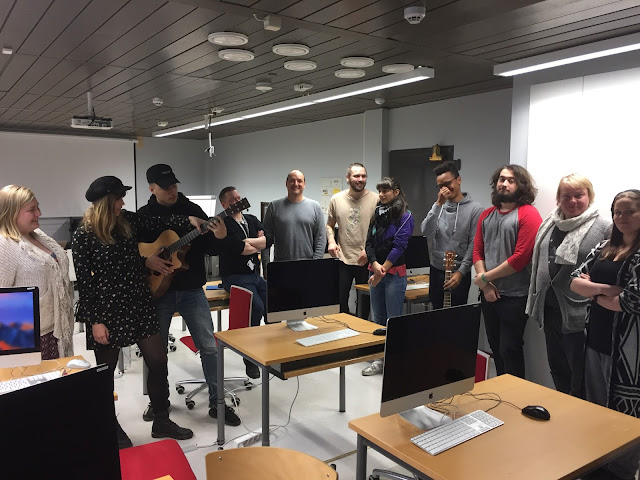 Students from music production have been collaborating with creative director Patric Sarin from Warner/HMC publishing. Sarin has been in the business for 17 years and believes in helping the students prepare for the outside world. The students are working in groups of three, co-writing songs together whilst Sarin mentors them giving them constructive feedback on how to improve. Groups of three were chosen to maximise the work flow in a team.

Sarin wants to bridge the gap between school life and working life as much as possible to help better prepare the students for when they graduate. He himself is still developing his work set and wants to help the students get familiar to feedback, good or bad. Some students find it difficult after graduating to adapt to working life and the way things work at companies. In today’s age, artists must come out with great sounding singles for radio to make some of their living, compared to back in the day when artists would write albums. Sarin wants to mentor the students to help them understand the business at an early age.

I spoke to a member of the class, Touko Keippilä, on the process of one of his groups. The basic idea was to write a song each day with the groups which were divided into by Sarin and their teacher, Janne Tauriainen. They were given a couple of leads (Which is when a publisher/A&Rs/general industry people search for songs for specific artists) to work with but there was also an option for free reigned work. The students settled on a genre and a general theme before writing any music. The tracker of the group began working on the instrumentation and the other members would work on the topline (vocal melodies and lyrics.)

Once there was a basic structure in place for the song, they then recorded the first version of the vocals and modified the track based on them. They then finished writing the song and recording of the vocals, after which the tracker went home to finish the track. The vocals were then edited by another member and then sent to the tracker once done, who then mixed the whole thing together. The next morning, the groups listened to each other’s works and received feedback from Sarin. The whole process was then restarted with new groups.

This is a fantastic opportunity for the students to show off what they can already do. Sarin made it clear he is looking for new exciting talent which should give the students more incentive to produce some of their best work in front of him. Sarin would also like to send their music over to A&R if good enough, for feedback. This is also a good example of some of the fantastic opportunities in which TAMK can provide for their students.

Rolands has his art featured in Blender nation!

Our soon to graduate student, Rolands Tiss has his animations featured on Blender nation!

These cool animations, created with Blender's new add-on Animation Nodes, are just one click away. 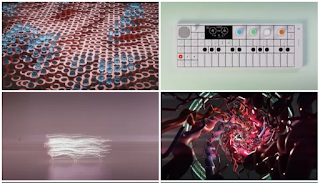 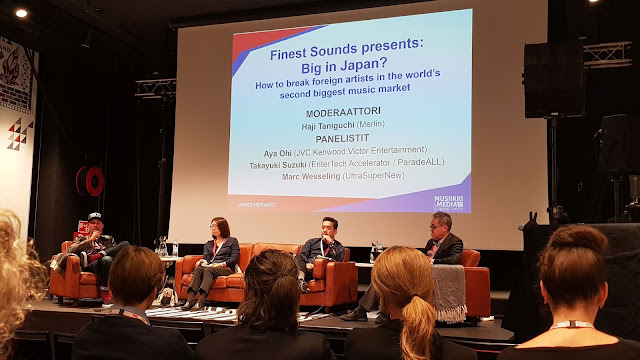 Finest Sounds hosted several sessions focusing on Japanese music business during Music and Media Conference in the beginning of October. Delegation from Japan brought 10 experts to Tampere. The intensive days offered a unique opportunity for professionals and business people as well as to the students to get insight information about Japanese market. For the students, this was an awesome chance to get direct feedback about their concepts and demos.

On Thursday morning the students and teachers from Tallinn University, Humak and TAMK got together, checked and confirmed the timetable for coming three days – it was tight but not too much. The first open session was Folk, World and Jazz Music Market in Japan, panel discussion with four Japanese representatives, moderated by Tapio Korjus. Right after that keynote Marc Wesseling, the co-founder of UltraSuperNew aggregated big audience into the lounge with fascinating examples of how their gallery works and how they combine brands with artists – cases included, ao. Heineken, RedBull and Supercell’s Clash of the Clans. Wesserling’s key words were the opinion leaders from different communities: skateboard, rap, heavy music – how to make them to work for the brand and make successful campaign, both within social media and in live events. 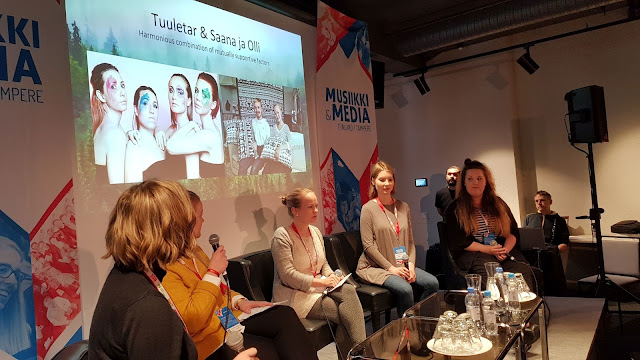 After Wesserling started the Matchmaking session, where 15 Finnish and Estonian brands and bands pitched their music and products, famous brands like Kyrö Distellery, Nokia Technologies, Ivana Helsinki and Festivality, and artists and bands from different genres, like Elifantree, Lieblings, Tuuletar, Steven Seagulls’ and Mokoma – the session was followed with active discussions and sharing cards, contacts and ideas among the participants.

Thursday evening was filled with gigs around the city – Lost in Music festival made students and teachers go from club to club listening and enjoying old favourites and exploring new artists.

On Friday, Finest sounds presented two sessions: “Big in Japan?” and “Still a Goldmine?” – both were full, students were active and the Japanese delegation was busy. In the afternoon students worked in a workshop to prepare their ideas for the hackathon on Saturday. 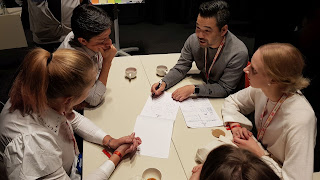 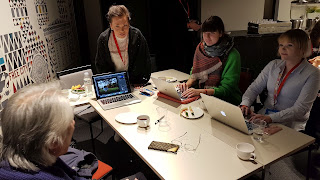 Music and Media had only three sessions on Saturday, conference rooms in Hotel Torni were not busy and most of the participants had left. But Finest students were working hard in their Hackathon. Ideas and concepts were developed and sharped, with the tutoring help from the teachers. Some concepts get really wild and crazy, many of the groups had visions for environmental, interactive campaigns. They get tutoring and feedback also directly from the Japanese experts, personal guidance for each group. Five hours work and then it was time for final presentations and feedback from Japanese delegates and Finnish companies – like this: 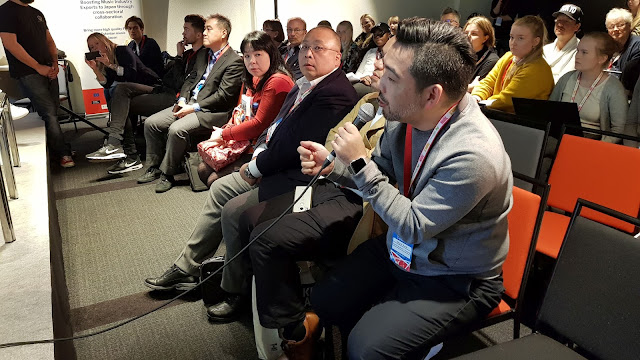 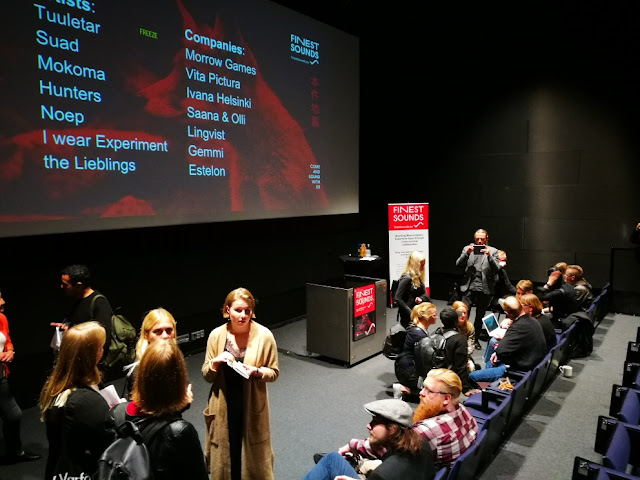 FinEst Sounds project has reached the Demo season 2, with new activities and first cases with bands and brands, artists and companies. In the beginning of September 33 students and 7 teachers from Tallinn University, Humak and TAMK get together in Logomo, Turku. The programme started on Thursday 7.9. with a short introduction of all the students. It was truly an international group, since the students of TAMK and Tallinn were not only from Estonia or Finland but from 10 different countries, including Venezuela, Mexico, Latvia, Russian among others.

Most of the students joined the project for the first time, so lecturer Jyrki Simovaara from Humak started the session with overview of Finest sounds and explained the roles of universities and students. Assignment number one was free brainstorming for ideas for demos. Combining any Estonian or Finnish artist with one creative industry brand, so that they can support each other in order to reach Japanese market successfully.

Even though the students met each other for the first time and working time was short, in the end of the day we could see creative, crazy and potential combinations like Estonian artist Noëp combined with Ivana Helsinki; Finnish vocal group Tuuletar with Saana and Olli; heavy rock band Mokoma with Morrow Games; Finnish artist Suad with Gemmi; The Lieblings with Lingvist, among others. Intensive afternoon with inspiring ideas! 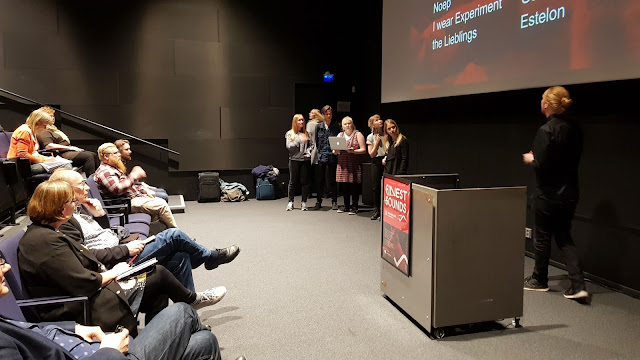 On Friday 8.9. Finest teams had the opportunity to listen to two lectures about Japan, Japanese culture and consuming habits. First speaker, Jenny Moberg from 07design. She has been working in the Japanese market for several years as an agent for Finnish design and has broad a knowledge about the culture, values and habits in Japan. She underlined the importance of IPR process and also reminded that the “old media” should not be underestimated channel in marketing.
“Japanese people appreciate high quality, fairness and loyalty”, she told and said that Nordic lifestyle has great value. 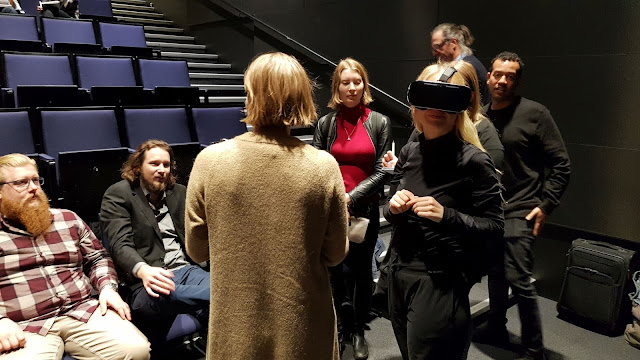 Tuomo Saikkonen from Sakara Records told us the good story how a Finnish heavy rock band Mokoma ended up to play in Loudpark, one of the biggest festivals in Japan. Ichiro Aono, from Japanese Creativeman, visited Tuska festival in 2012 and got enthusiastic so next year Music Finland organized Mokoma to a showcase gig at Studio Coast for an entranced audience of 1500 people. Couple of years silence, negotiations and then 2016 Mokoma was in Loudpark. About the differences in business culture Tuomo told that it was impossible for the Japanese business people to believe that one artist of the band is also the CEO of the record company. It is important to learn in advance the hidden meanings and metaphors of things, like the case “Stam1na and Hawaii shirts” educated.

Two intensive days in Logomo ended with the new presentations of student groups and feedback from the companies. The representatives from Bafe’s Factory and Vita Pictura were surprised about the visual demos and creativity of students. Next step is Music and Media, groups will continue their work online and results will be shown to Japanese delegation in Tampere in the beginning of October. 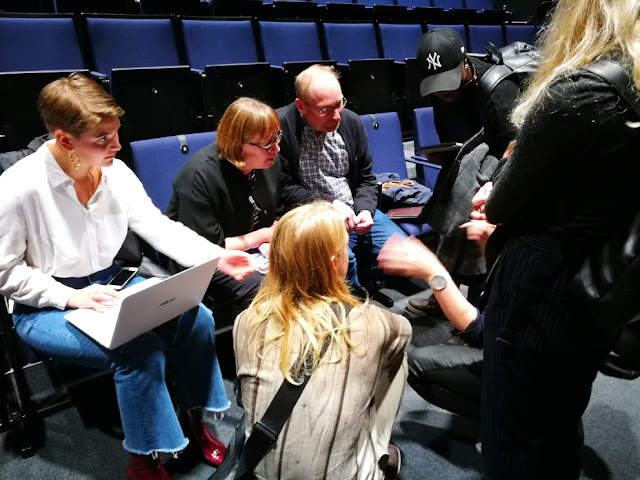