NUMA is one of our most important annual global activities, organised together with our academic & industry partners. NUMA2012 nominees are selected, the winner is revealed at MindTrek October 4th. Here's the press release:

Ubimedia comprises technology embedded in its surroundings that enhances our ability to sense and communicate with our environment. The Nokia Ubimedia MindTrek Awards competition (NUMA2012) addresses digital media makers with different backgrounds. It gives them the opportunity to present their visions on the future of ubiquitous media to the unique audience of the annual MindTrek conference in Tampere in October.


”The top three submissions involve people interacting out in the real world away from the desktop confines of the home. These inspiring projects included subtle navigation using music and smartphones, a flying social robot companion that encourages exercise, and a system offering magical interactions with plants. These innovative projects will provoke discussion and exploration now, and will stimulate others to design meaningful interactions in the ubiquitous media landscape of the future”, says Assistant Professor at Aarhus School of Architecture Tim Merritt, honorary chair of the jury.

The 2012 entries have been ranked by the competition jury. The following three unique and inspiring submissions are the finalists in alphabetical order: 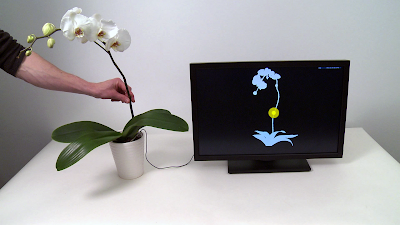 Ever thought interactive devices could be simply grown in the future? If not, maybe the interactive plant interface, Botanicus Interacticus, will make you reconsider. Using multi-frequency electrical pulses, this technology is capable of sensing the location and intensity of touching on any kind of plant (size permitting). This establishes a surprisingly powerful interface between the organic and the digital world and allows for a literally natural integration of media into the environment. This groundbreaking approach broadens the scope of ubimedia in an exciting way. 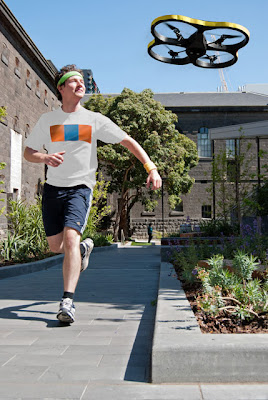 There are numerous new popular running applications for mobile devices, but even the best of them cannot replace the motivation caused by the physical presence of a running mate. The flying running companion Joggobot comes surprisingly close to a social running experience. This project shows the potential of ubimedia when it actually manifests in the playful behavior of physical objects instead of being rendered onto small screens. 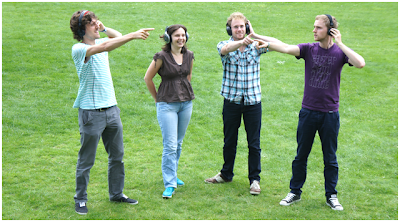 Lost in a strange place in an unfamiliar city? This ambient audio navigation service is an innovative ready-to-market solution that relieves you from exposing your expensive phone and enables you to move about like a native. You will enjoy having your eyes free for looking around or interacting with friends, while a clever manipulation of stereo channels leads you the way using your favourite music. Mobile devices make services available virtually anywhere, but still tend to distract us from our surroundings. The jury values that the solution solves this dilemma in a simple and elegant way.

Honorable mentions
The jury would like to express their recognition for two distinct projects: “Digital taste synthesizer” by the CUTE-Center of National University of Singapore, a visionary project aiming to conquer the sense of taste for ubimedia and “Floating about” by Hochschule Darmstadt, a social location-based game that uses mobile projection devices to render an alternate reality directly on objects in the environment

About NUMA
The Nokia Ubimedia MindTrek Awards competition with a total prize sum of 6.000 euros is open to all kinds of artists, practitioners and researchers. The competition is part of the international MindTrek 2012 conference held for the 16th time in Tampere, Finland during October 3rd – 5th. Almost 600 people participated in the conference last year.